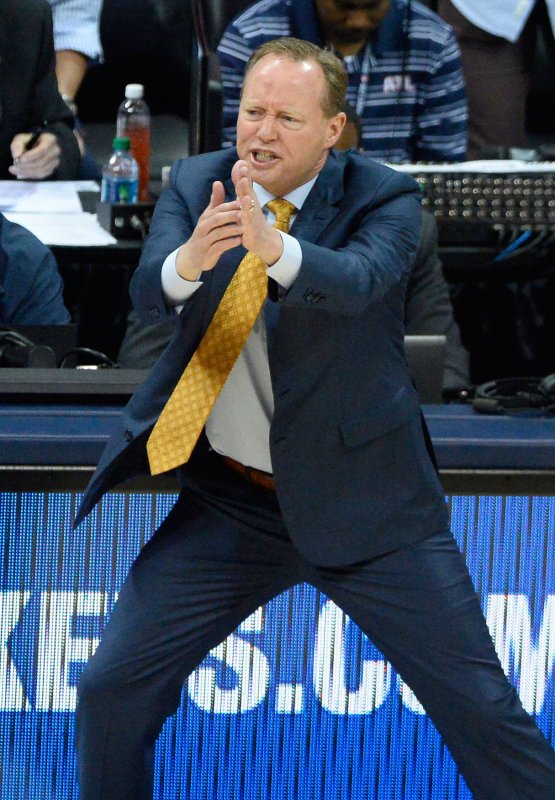 Former Atlanta Hawks coach Mike Budenholzer calls for a timeout during a game against the Washington Wizards during an Eastern Conference playoff game in 2015. Photo by David Tulis/UPI | License Photo

Former Atlanta Hawks coach Mike Budenholzer will meet with the Milwaukee Bucks to interview for the team's coaching vacancy and is considered the early frontrunner for the job, a league source told AmicoHoops.

The Bucks have had interest in Budenholzer for quite some time. The 2014-15 Coach of the Year has been preparing a presentation for the Bucks after he was told the New York Knicks were passing on him to hire David Fizdale.

Milwaukee is conducting its due diligence in this coaching search, the source said, as the franchise is reportedly interviewing as many as 10 candidates.

Budenholzer, however, is the Bucks' preferred choice, the source added.

The Hawks and Budenholzer mutually agreed to part ways April 25. The Arizona native interviewed with the Phoenix Suns, but withdrew from consideration.

Throughout league circles, Budenholzer is renowned for his ability to develop and improve young talent, while also teaching his players proper discipline.

The Bucks' roster, headlined by superstar forward Giannis Antetokounmpo, has loads of talented players, but most of them have failed to show any type of consistency.

The Bucks fired Jason Kidd midway through the season, replacing him with interim coach Joe Prunty. They finished 43-39 before losing to the Boston Celtics in seven games in the first round of the Eastern Conference playoffs.

Budenholzer compiled a 213-197 record in five seasons with the Hawks.