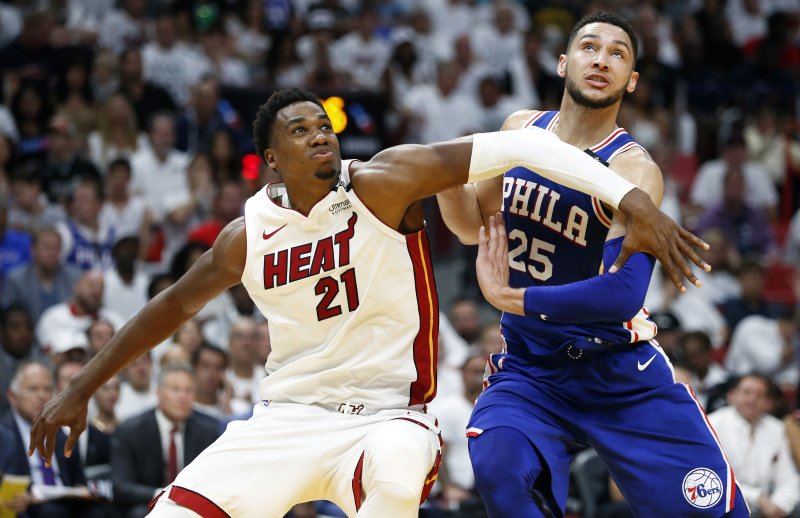 Philadelphia 76ers forward Ben Simmons (R) and Miami Heat center Hassan Whiteside (L) wait for a rebound during the second period of Game 4 of the Eastern Conference first round playoffs Saturday at the AmericanAirlines Arena in Miami, Fla. Photo by Rhona Wise/EPA-EFE/-Shutterstock

April 21 (UPI) -- Ben Simmons and James Johnson were at the center of a huge second quarter scuffle during the Philadelphia 76ers' 106-102 win against Miami Heat Saturday at AmericanAirlines Arena in Miami, Fla.

The Sixers now own a 3-1 lead in the first round Eastern Conference playoffs series and can eliminate the Heat with a win on Tuesday in Philadelphia.

Miami and Philadelphia have played an incredibly physical series, with that mentality boiling over with about 4:20 remaining in the first half. The play unraveled after Heat center Hassan Whiteside missed a shot at one end of the court. The Sixers took off in transition, with Dario Saric running into the paint. Saric lost the ball and several players threw their bodies onto the floor.

Heat guard Goran Dragic sprinted down the court in transition, with James Johnson trailing the play. Dragic went around Simmons with a behind the back dribble. He then ran into Robert Covington under the rim and crashed to the floor. Johnson came flying in and shoved Covington against the padding on the field goal.

Things are getting PHYSICAL on the floor. pic.twitter.com/w5RnowYgp0

Simmons came in and interjected, before Johnson turned his attention to the Sixers' star. The two exchanged words and stood face to face, before being separated by teammates and coaches.

"If somebody is going to push my teammate, I'll be there for them," Simmons said. "And everyone has my back. I think, vice versa it's the same thing with everybody on the Miami Heat. They have each other's back. That's the way we want to play. We play as a team."

Johnson and Covington were given a double technical for their infractions.

"It was always going to happen," Heat coach Erik Spoelstra said of the physicality. "It was a foul and then from there I think it was much to do about nothing. I don't think anybody needs to look at our series ... it's physical, competitive basketball."

The Sixers briefly took command of a tight first quarter. But Wayne Ellington capped off a 7-0 run at the end of the quarter for the Heat, tying the game at 26-26.

Ben on the take! pic.twitter.com/4FF4VYgW5o

The Sixers outscored the Heat 23-22 in the third stanza, getting six points apiece from Simmons and Ersan Ilyasova. Miami built a 12-point lead in the quarter, but watched it slip away as the Sixers ended the period on a 6-0 run and trailed 83-79 entering the fourth quarter.

Then things started to unravel for the Heat. Miami couldn't compete on the glass and shot poorly from the free throw line down the stretch. Wade tried to keep the home squad in striking distance - netting the Heat's final eight points - but it wasn't enough to keep pace with the Sixers.

Philadelphia outscored Miami 27-19 in the fourth quarter. The Sixers out-rebounded the Heat 57-43, while netting 77.1 percent of their free throws. Miami made just 52 percent of its free throws.

"It feels great," Embiid said. "I got hit a couple of times on plays. But my body was pretty soft in the first game, so tonight coming in I needed a massage."

"We took care of business. Like I said, I love the physicality. I missed the shots that I was making the other night. I though I did other things to have an impact, especially defensively. I'm pretty happy about things."