The most impressive feat you'll see all night. pic.twitter.com/XaL61JqYoz

April 18 (UPI) -- A man managed to keep his full beer intact despite a collision with Jayson Tatum during the Boston Celtics' Game 2 win against the Milwaukee Bucks.

The collision occurred when Tony Snell was guarding Tatum on a possession at half court during the Celtics' 120-106 triumph Tuesday at TD Garden in Boston.

Celtics guard Terry Rozier tossed a pass toward the 3-point line for Tatum. Snell reached in on the former Duke star as he tried to gain control of the pass. Tatum tumbled out of bounds in pursuit of the ball. He eventually picked it up, but he was already off the court.

Tatum's momentum carried him into a man walking near the court-side seats. The fan was holding a beer in his right hand. He managed to turn his body, shielding the beer, and using his back to make contact with the 6-foot-8, 205-pound athlete.

Get someone who takes care of you like this guy and his beer 🤗 pic.twitter.com/r72wPauUOb

The man used his off hand to hold onto a seated fan's shoulder, in the name of balance. Not a drop of beer was spilled in the run-in. The man happily lifted his cup and smiled at the revelation.

He pointed at his prized possession and gave a thumbs-up to the crowd before walking off.

Tatum had four points, seven rebounds, four steals and three assists in the win. Jaylen Brown led Boston with 30 points. Snell had two points and two rebounds for the Bucks. Giannis Antetokounmpo netted 30 points to lead Milwaukee in the loss. 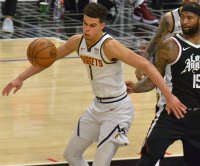 NBA // 1 day ago
Nuggets' Michael Porter to have potential season-ending back surgery
Nov. 29 (UPI) -- Denver Nuggets forward Michael Porter Jr. will undergo surgery on his lower back Wednesday, which could end his 2021-22 season. 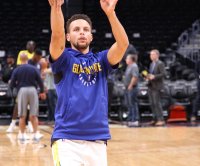