Will Barton and the Denver Nuggets face the Los Angeles Clippers in a critical game for both teams Saturday night. Photo by Terry Schmitt/UPI | License Photo

LOS ANGELES -- The Denver Nuggets can not only improve their playoff chances Saturday at Staples Center, they can also end the Los Angeles Clippers' hopes of extending their season.

The Nuggets will take a four-game winning streak into Los Angeles, as the recent run of success has put them on the doorstep of playoff eligibility. They have a 44-35 record, leaving them a half-game behind eighth-place Minnesota, which beat the Lakers Friday night and holds the final playoff spot in the Western Conference at the moment.

Denver does not hold the tie-breaker against the Timberwolves, but the ninth-place Nuggets are only one game behind three teams tied for fifth.

Denver and Minnesota will meet once more, in Minnesota on Wednesday, to conclude the regular season, with the Timberwolves holding a 2-1 advantage in head-to-head games this season if it comes down to that tiebreaker.

A Denver victory Saturday over a Clippers team that has lost three of its last four games would put significant pressure on a Minnesota squad that lost to the Nuggets on Thursday, 100-96.

The Nuggets essentially have been in payoff mode for a week now and have responded with clutch victories. All four victories in their win streak have been by four points or less, with two of them coming in overtime. All have come since March 30.

"We're not folding," Nuggets forward/guard Will Barton told the Denver Post. "Good play. Bad play. Guys just come together and we stand in it together. There's just a lot of togetherness right now, and I love it."

RELATED Dennis Smith Jr. bounces alley-oop to himself during game

For the Clippers, they know that a loss Saturday will end their playoff chase. Their hopes were pushed to the brink on Friday night without even playing, as the Pelicans defeated the Suns, while the Timberwolves also won.

The Clippers' chances were put on high alert after they were trounced at Utah on Thursday. Los Angeles is in 10th place in the Western Conference, 2 1/2 games behind Minnesota, with three games to play.

Against Utah on Thursday, the Clippers were never in the game and lost by 22 points. And that was a game in which players knew that a defeat would virtually crush any playoff hopes.

"It was the first game I thought we let go of the rope," Clippers coach Doc Rivers said, according to the Los Angeles Times. "Like, you could see it early. It was disappointing. It happens. It's life. We have to get over it. I have to watch the film. That was disappointing tonight."

During a season in which the Clippers were devastated by injuries and watched All-Star Blake Griffin get traded to the Detroit Pistons, Rivers should get credit for even getting his team this far.

"It's been tough," Rivers said, according to the Los Angeles Times. "Game to game, because of the injuries, because of the guys we have left, you don't have the luxury of saying, 'This is your lineup every night.'"

The Nuggets' recent success has come despite second-leading scorer Gary Harris (knee) missing the last 10 games. He remains day-to-day. Forward Tyler Lydon (ankle) has been out since January. 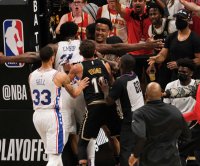