Nuggets' Harris remains out against Raptors

The Denver Nuggets will likely be without leading scorer Gary Harris for a sixth consecutive game because of a right knee strain when they play the Toronto Raptors on Tuesday night.

Nuggets coach Michael Malone said it was likely that the guard will miss the game at the Air Canada Centre and listed him as a "maybe" for the game on Friday at Oklahoma City.

Without Harris, the Nuggets lost 123-104 to the 76ers on Monday night in Philadelphia.

"It's very unfortunate because it's killing Gary," Malone said. "Gary lives for these moments. ... it's a big player to be without."

The Nuggets (40-34) are trying to overtake the Utah Jazz for eighth place and a playoff spot in the Western Conference. They dropped two games behind the Jazz after the loss on Monday.

Harris is averaging 17.7 points per game while shooting 48.6 percent from the field and 39.9 percent from 3-point range. He was injured when he landed awkwardly on his right leg after being fouled on a dunk in the fourth quarter of a win over the Detroit Pistons on March 15.

The Raptors' drive to equal their club record of 56 wins in a season was stalled Sunday night when they lost to the Los Angeles Clippers after a strong first quarter.

"But I like our energy, the way we started the game; we've got to sustain it," Raptors coach Dwane Casey said. "Now it's the first time in a long time our second unit did not play well, and you know, like I said, we have got to be a consistent team collectively, not one guy, not the first or the second unit.

"For us to be successful, everybody, we all have to click."

The Raptors (54-20) remain two games short of matching their franchise-best win total established in 2015-16. They own the second-best home record in the NBA at 30-7.

"It's that time of the season, everybody's playing for something," said Raptors reserve guard Fred VanVleet, who scored 11 points Sunday. "And there's going to be tough wins, and I mean you don't want to lose the games but need that adversity.

"We've kind of been rolling a little bit, so it's not nice to have tough games, I want to win them all by 100, but at the same time you have to take the lessons in between and try to improve without practicing but improve within the game. We just didn't do enough (Sunday) to get it done, but if we feel sorry for ourselves too long, it carries over and we can't allow that."

In the only meeting between the teams this season, the Nuggets defeated the Raptors 129-111 on Nov. 1 at Denver.

The Nuggets are 2-3 on their season-long seven-game trip covering 15 days with five time-zone changes.

Nuggets forward Paul Millsap played through flu symptoms in a win over the Wizards in Washington. He said he felt considerably better entering the game Monday at Philadelphia.

"I'm hitting my bounce-back," Millsap said. "It was tough (against Washington). I basically just wanted to be out there defensively and try to make a difference. Offensively, I couldn't really see the basket."

Millsap had 16 points and nine rebounds in 32 minutes on Monday in his 14th game back from wrist surgery.

Denver is Toronto's last game on the schedule against a Western Conference opponent. The Raptors have already set a season franchise-record with 18 victories against the West, topping 17 the past two seasons.

NBA // 1 day ago
Griner, Taurasi lead Mercury over Sky, tie WNBA Finals 1-1
Oct. 14 (UPI) -- Brittney Griner scored a game-high 29 points and Diana Taurasi scored 18 of her 20 points in the second half and overtime to lead the Phoenix Mercury over the Chicago Sky in Game 2 of the WNBA Finals, tying the series. 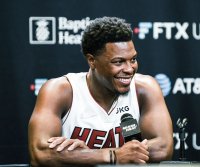