The two-handed slam Wednesday capped off regulation during the Raptors' 121-119 win at Little Caesars Arena. Toronto eventually won in overtime to clinch a playoff berth.

DeRozan took flight with about 10 seconds to go in regulation. He took an inbound pass from Valanciunas to start the play, before dribbling the length of the court. The Raptors star took a step inside the 3-point line before rising up and going right at the 6-foot-8, 240-pound Tolliver.

But DeRozan merely disregarded the veteran forward, throwing the dunk down with both hands to give the Raptors a 113-112 edge. He was also fouled on the play and made the resulting free throw.

"Once I saw I had an angle, it was downhill from there," DeRozan told reporters after the game. "And the same situation, kinda, with the game-winner. Just make that read. I saw Blake [Griffin] step in like he was going to come but I knew nobody was going to leave the corner so I just went to the rim. Either I was going to get fouled or get two points."

Griffin tied the game on the next possession to put the contest into overtime.

DeRozan scored 25 of his game-high 42 points in the second half. He also had six assists and four rebounds. Kyle Lowry had 15 points, 15 rebounds and seven rebounds in the win. Griffin led the Pistons with 31 points. Andre Drummond had 10 points and 21 rebounds in the loss.

The Raptors' All-Star guard also made the biggest play of the game, when he passed to Fred VanVleet for the go-ahead jumper with 1.1 seconds remaining in overtime.

NBA // 2 days ago
NBA bans teams from in-person draft interviews, recent workout videos
April 7 (UPI) -- The NBA has barred teams from conducting in-person workouts or interviews with prospects and even requesting video of recent workouts ahead of the draft, scheduled for the end of June. 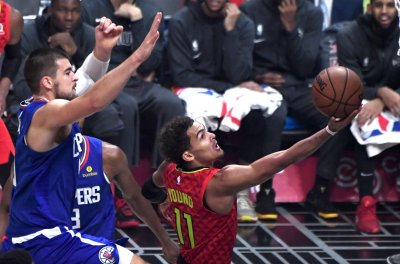