He did so in a video posted by Red Bull. Malone wore a cushion over his stomach before putting on a onesie, glasses and a wig with dreadlocks for good measure. He also had grey coloring added to his beard.

The 54-year-old Utah Jazz legend went to a janitor's closet to get supplies before wiping down the backboards of a basketball court, mopping the floor and more.

Davis thought he was just in the arena to take some photos and do a commercial.

Malone swept around the arena, while Davis took some shots. Davis then recited some lines while being filmed, while Malone messed around with a ladder in the background.

Malone eventually rode a floor cleaner into some lighting equipment, causing enough of a ruckus to get the commercial's staff and Davis' security guard to intervene.

The 6-foot-9 Hall of Famer then walked up to Davis and asked him to sign an autograph.

"Can you sign that for me? To Karl Malone," he said.

Davis and Malone shared a hug and the Pelicans star couldn't stop laughing after the big reveal.

Malone did drop a few hints in the video. At one point, he asked the film crew if they wanted to listen to a little 'Jazz,' an obvious reference to his former team. He also said his "assist man" named John could help clean up the lighting equipment. That was a reference to Hall of fame point guard John Stockton.

"Awful quiet in here! Listen to a little Jazz around this place?!" pic.twitter.com/Vs94Y3g5Bq 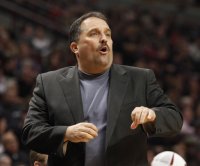 NBA // 4 days ago
NBA playoffs: Suns' Chris Paul out indefinitely due to COVID-19 protocol
June 16 (UPI) -- The Phoenix Suns could enter the Western Conference Finals without Chris Paul, as the star guard landed in the NBA's health and safety protocol Monday and is out indefinitely.
Advertisement