An MRI revealed that Knicks star Kristaps Porzingis tore his ACL in Tuesday night's 103-89 loss to the Bucks. pic.twitter.com/LczJ5muDvz

Feb. 7 (UPI) -- New York Knicks star Kristaps Porzingis is out for the season after tearing his left ACL Tuesday against the Milwaukee Bucks.

An MRI confirmed the tear, according to the team.

The Knicks lost the Unicorn and the game 103-89 at Madison Square Garden in New York City. Porzingis scored 10 points in 11 minutes of play before suffering the injury. It occurred with 8:46 remaining in the second quarter.

Porzingis threw down a dunk on Giannis Antetokounmpo during the play, before collapsing onto the court and grabbing his left leg in agony. He was helped off of the court by teammates and taken to the Knicks' locker room.

"It's always tough when a guy goes down, until you find out what's wrong," Knicks coach Jeff Hornacek told reporters after the game. "You guys have seen horrible injuries that you can tell right off of the bat. I've been around guys who have torn things and haven't landed on anybody."

The 7-footer was posting 22.9 points, 6.7 rebounds and a league-best 2.4 blocks per game for the Knicks. He was set to join LeBron James' squad at the 2018 All-Star Game on Feb. 18 at the Staples Center in Los Angeles.

"It was a rough play, I don't think I pushed him on there," Antetokounmpo told reporters after the game. "I think he just landed not the way he wanted. I hope he's ok because he's a close friend to me." 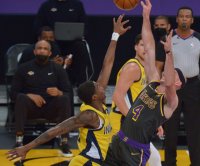