Confident Thunder look to bounce back at Denver 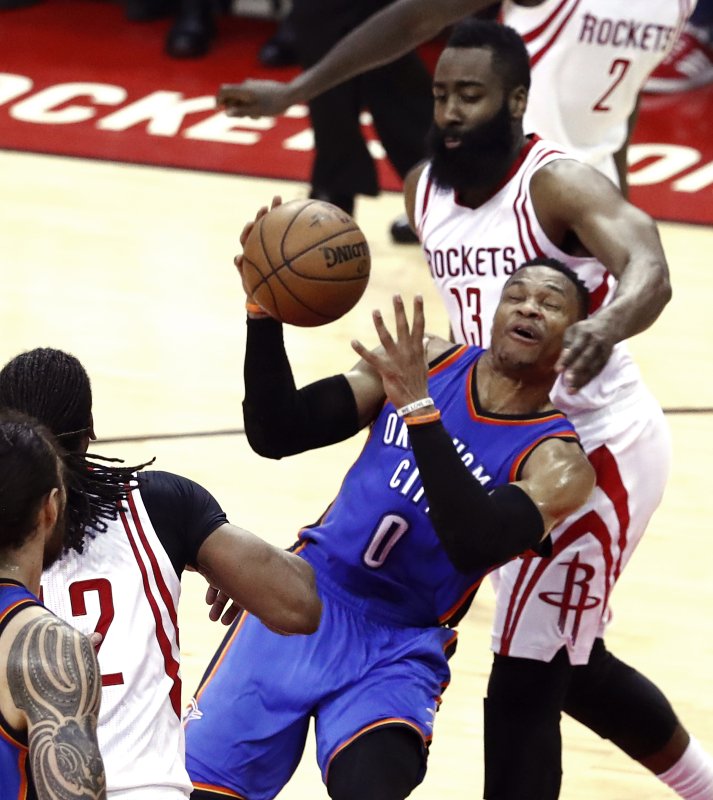 Russell Westbrook and the Oklahoma City Thunder square off with the Denver Nuggets. Photo by Larry W. Smith/EPA

When Oklahoma City came to Denver on Nov. 9, the team's chemistry was a work in progress. The Thunder were trying to mesh three superstars into a cohesive unit, and at that point it was struggling.

The loss to the Nuggets that night was Oklahoma City's fourth straight and dropped its record to 4-7. Russell Westbrook, the reigning NBA MVP, and his fellow stars, Paul George and Carmelo Anthony, spoke of patience, and that the Thunder would find a way to get things going in a positive direction.

Turns out they were right. The slow start has given way to a midseason surge, and Thursday night, exactly 12 weeks after the first visit, a different, more confident Oklahoma City team visits the Denver Nuggets for another nationally televised matchup.

The Thunder (30-21) had its eight-game winning streak snapped Tuesday in Washington, but it is a team on the rise and aiming to retake its spot atop the Northwest Division.

The surge has been bittersweet, however. Oklahoma City guard Andre Roberson suffered a ruptured left patella at Detroit on Saturday and is lost for the season. The Thunder are 1-1 without him so far.

"It's tough," Westbrook told reporters earlier this week. "Dre is my boy. I love having him on the floor with me, and it's a tough situation for him. We are just going to continue to lift him up and pray for him, keep our spirits high for him and keep this thing rolling."

Oklahoma City is facing a Denver team hurting physically and psychologically. The Nuggets are encouraged by the progress power forward Paul Millsap is making in his work to return from left wrist surgery, but meanwhile other players are going down.

Forward Wilson Chandler has missed two games after leaving Saturday's win over Dallas with a migraine. He was available in Tuesday's loss at San Antonio but didn't play. Center Mason Plumlee wasn't available and could miss several games after suffering a calf strain against Boston on Monday.

The game against the Celtics was the first of consecutive heartbreaking losses for the Nuggets (26-25). Will Barton missed last-second 3-point attempts in both games that would have given Denver a win each time.

Barton was disappointed he couldn't deliver in the clutch on back-to-back nights, but he is happy he got the opportunity.

"Moments like this, you've got to go through them to grow up," he told The Denver Post after the loss to the Spurs. "I'm happy I can even be in the NBA going through these types of things -- things I dreamed of. I love it. I'll be back."

Denver needs to figure out how to win games against the NBA's elite. After playing -- and struggling -- against the league's poorer teams, the Nuggets are in the midst of playing nine of 11 games against playoff teams.

Coach Michael Malone thinks the team will be fine if it plays the way it did against the Celtics and Spurs.

"They've given everything the last two nights," Malone told The Denver Post on Tuesday night. "And if we continue to play that hard, I think we're going to find a way to turn the corner and be a really good basketball team."