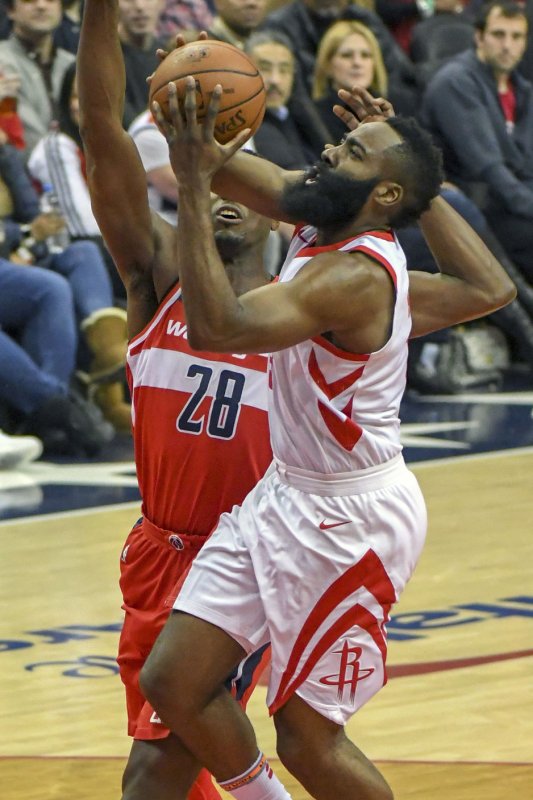 Houston Rockets guard James Harden drives to the basket in a game against the Washington Wizards on Dec. 29. Photo by Mark Goldman/UPI | License Photo

Harden, sidelined for seven games with a Grade 2 left hamstring strain, will be listed as questionable when the Rockets host the Minnesota Timberwolves on Thursday night at Toyota Center.

Harden, who leads the league in scoring (32.3 points) and ranks third in assists (9.1), sustained the injury in the fourth quarter of a double-overtime victory over the Los Angeles Lakers on Dec. 31. The Rockets (30-12) went 4-3 without Harden.

Harden earned a reputation for durability prior to this setback, missing a total of two games over the previous three seasons. As a precaution, he will play under a minutes restriction.

"I look back at it as something that I needed," Harden said of the break. "Mentally, physically, just to get my mind right. Obviously, my body as well.

"I'm just happy to be back out here with the staff and the team preparing for a game."

Early Wednesday evening, the NBA announced that Rockets forwards Trevor Ariza and Gerald Green will each serve two-game suspensions for their roles in a postgame confrontation inside the Clippers locker room Monday night. The league ruled that Ariza and Green aggressively sought a confrontation with injured Clippers guard Austin Rivers following a 113-102 road loss. Chris Paul and Harden were not penalized for their reported participation in the incident.

Having thrived just out of the spotlight for most of this season, the Timberwolves (29-17) had not only claimed momentum with their recent stretch of excellent play, they'd also garnered attention after winning 12 of 15 games and five in succession heading into Orlando on Tuesday.

Awash in kudos, Minnesota laid an egg against the Magic, losing 108-102 to a team that hadn't won since the calendar flipped to 2018. Orlando had tasted victory only once over its prior 17 games, and the surging Timberwolves produced an effort befitting a team playing down to the level of its competition. That fact rankled Timberwolves guard Jimmy Butler.

"I think we were comfortable," Butler said. "We didn't do what we were supposed to do. We didn't play hard, we didn't rebound, we didn't guard, we didn't execute, we didn't do anything. We were going through the motions out there. And when you do that in this league you get beat by anybody."

With Minnesota having last qualified for the postseason in 2003-04, Butler was acquired from the Bulls during the offseason to deliver the production and leadership required to end that drought. Barring the unforeseen, the Timberwolves will do precisely that as they lead the Northwest Division comfortably and own the best record in the West (23-6).

What the setback in Orlando offered was needed perspective. The Timberwolves haven't accomplished anything yet, and no number of accolades can shortcut the process required to achieve the goals set in front of a franchise seeking to reverse their history of repeated failures.

"We've got a lot of steps to get to where we want to get to," Butler said.