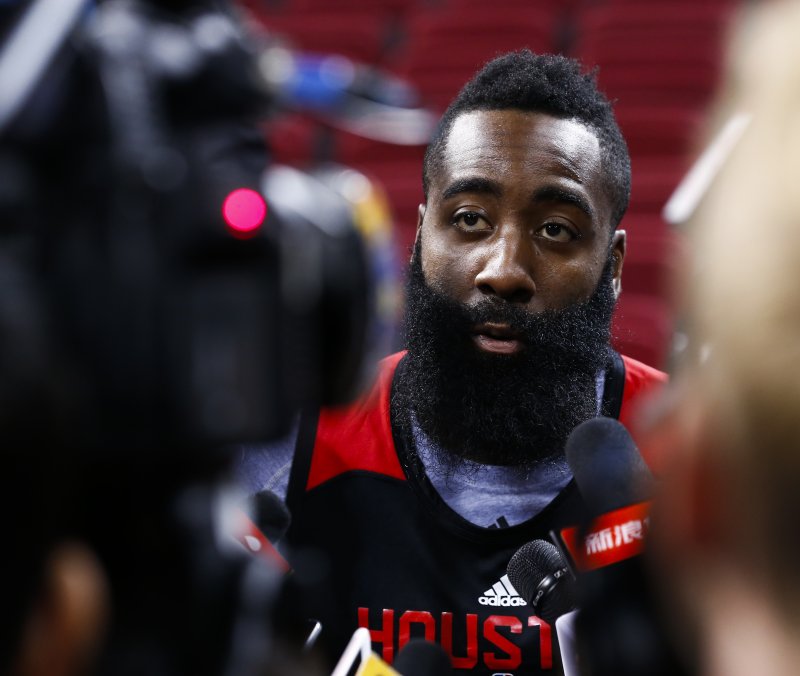 Harden mounted a scoring flurry down the stretch of the third to help the Rockets pull away to a 118-97 win over the Indiana Pacers on Wednesday night at Toyota Center.

With Houston (17-4) leading 70-64, Harden scored 13 points in the final 3:54 of the quarter, including three consecutive 3s inside the final 3:08. When Harden drilled a trey with nine seconds left in the third, Houston secured an 89-71 lead en route to its sixth consecutive win.

The Rockets finished the month 12-1, sandwiching two six-game winning streaks around a home loss to the Toronto Raptors on Nov. 14. Harden produced 29 points, eight rebounds and 10 assists, and closed November averaging 34.9 points and 10.1 assists in 13 games.

"We're never satisfied," Harden said. "We have a long way to go. It's going to be a lot of ups and downs; right now we're playing pretty well. We're going to go on the road and continue what we've been doing."

Clint Capela also posted a double-double for Houston with 22 points and 13 boards; Ryan Anderson fell a rebound short while scoring 19 points. Trevor Ariza chipped in 14 points, and like Harden (4 of 12) and Anderson (5 of 9), finished with at least four 3-pointers, going 4 of 5.

Thaddeus Young led the Pacers (12-10) with 23 points, including 11 during a short burst to open the fourth quarter. Victor Oladipo added 19 points and five assists while Myles Turner posted 15 points, 10 rebounds and four blocked shots -- all in the first quarter -- for Indiana.

The Rockets' bench and ability to adjust proved pivotal once more. After Indiana had seven blocks in the first quarter while limiting Houston to 38.5 percent shooting, the Rockets converted 10 of 18 shots in the second quarter and scored half of their 32 points in the paint.

And, after attempting just 13 3-pointers prior to the intermission, the Rockets made 14 of 27 3s in the second half.

The Rockets grabbed the lead for good in the third quarter when Anderson nailed a 3-pointer with 9:32 to play before Ariza followed with back-to-back treys in extending the lead to 65-58. Some four minutes later, Harden took ownership of the barrage.

Said Young: "They made some contested 3s and got a few open looks and that's what type of team they are. They're going to knock those down. Basically, we just let it get away from us defensively missing a few closeouts, and that's how they got some open looks."

Indiana entered play leading the NBA in 3-point percentage (40.9) but made just 7 of 28 from deep. The Pacers scored 60 points in the paint yet finished only 6 of 6 from the free-throw line.

"I thought we settled tonight on the perimeter with only six free-throw attempts by us," Pacers coach Nate McMillan said. "We shot 7 for 28 from the 3-point line and just not enough attacking the basket. When we did attack the basket, we scored and had 60 points in the paint, but we settled a little bit too much on the perimeter."

NOTES: Rockets C Nene (right shoulder sprain) returned following a one-game absence and relegated C Tarik Black back to third-team status. Black has received inconsistent minutes this season, playing only when Nene is unavailable to spell Clint Capela. Nene scored one point in 10 minutes Wednesday. ... Pacers G Joe Young, a Houston native, had his No. 0 jersey retired earlier Wednesday at Jack Yates High School. With Young as the linchpin, Yates High won back-to-back state championships in 2009 and '10, including an unofficial national title the latter season. ... The Rockets made a season-low four 3-pointers in the first half yet still managed to extend their streak of games with at least 18 by drilling 14 following the intermission.