LeBron gets ejected for the first time ever pic.twitter.com/Qn5KZnOtjl

CLEVELAND -- Kevin Love scored a season-high 38 points, LeBron James was tossed from the game, and Dwyane Wade put a hurting on his old team in the Cleveland Cavaliers' 108-97 win over the Miami Heat on Tuesday.

The Cavs, who led the game by as many as 34 points, have won nine straight for their longest regular-season winning streak since Jan. 15-Feb. 5, 2015. The run began after they started the year 5-7.

Love added nine rebounds and shot 14 of 17 from the foul line in 26 minutes.

James was ejected with 1:59 left in the third quarter for arguing a non-call with referee Kane Fitzgerald. James screamed at Fitzgerald for not calling a foul against Hassan Whiteside on James' drive to the hoop.

James, who was ejected for the first time in his career, finished with 21 points, 12 rebounds, six assists and five steals.

Wade, who like James once starred with the Heat, scored 17 points off the Cleveland bench.

The Cavs set a season high with 75 points in the first half, and Love's 32 points were tied for the most by an opponent in a half in Miami history.

Dion Waiters led the Heat with 21 points on the night, and Bam Adebayo scored 19. Josh Richardson added 15, but Goran Dragic was limited to seven points on 1-of-5 shooting.

Tuesday marked the first time Heat coach Erik Spoelstra went against James and Wade at the same time. The two played for him on the Heat and went to four consecutive Finals from 2011-14.

"Yeah, when you see these guys in different uniforms it's always like, 'Really, that looks strange,'" Spoelstra said. "This league changes year to year. We've been through a myriad of changes the last five years. A lot of new faces here. I love the team that we have in that locker room."

Cleveland led by as many as 18 in the first quarter and was up 35-24 when it was over. Waiters scored 13 in the first.

NOTES: Cavs G Iman Shumpert (left knee soreness) missed Tuesday's game. He played seven minutes Monday in a win in Philadelphia, but coach Tyronn Lue said Shumpert "felt fine, and then once he played those minutes he said he didn't feel right." Shumpert had missed three games with the injury prior to Monday night. ... Lue said the next step in Cavs G Isaiah Thomas' road to a return is for the injured All-Star to play two-on-two and three-on-three at practice, but there was no timetable for that yet. Thomas hasn't played this season because of a torn labrum and other right hip injuries. ... Heat coach Erik Spoelstra said David Fizdale, his former assistant who was fired as Memphis' head coach on Monday, would not be rejoining the Heat staff. "He's a head coach," Spoelstra said. ... The Heat finishes its four-game road trip Wednesday in New York.

NBA // 1 day ago
Stephen Curry scorches Clippers for 45, improves Warriors to 2-0
Oct. 22 (UPI) -- Stephen Curry erupted for 45 points -- with 25 in the first quarter -- to lead the Golden State Warriors to a narrow win over the Los Angeles Clippers in San Francisco. 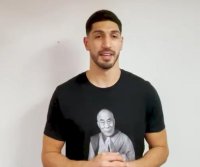