Cleveland Cavaliers star LeBron James sat out practice on Wednesday and was ruled out for Friday's preseason game against the Orlando Magic due to a left ankle injury, coach Tyronn Lue announced.

Lue also told reporters that he was "not sure" if James would be ready to play in the Cavaliers' season opener against Kyrie Irving and the Boston Celtics on Oct. 17.

"Got treatment all day today, so I'm not sure if we should be concerned or not," Lue said. "But it's pretty sore today so we'll just see what happens."

James sustained the injury during a practice on Sept. 27 when he stepped on the foot of rookie forward Cedi Osman. James made his preseason debut Tuesday and scored 17 points in a 108-94 loss to the Chicago Bulls. 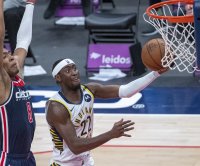