"Hoodie Melo" was draining 3-pointers and crossing over defenders during a Blue vs. White scrimmage at Edmond North Gymnasium in Edmond, Okla., about 25 minutes from Chesapeake Energy Arena, the home court of the Thunder.

"#HoodieMelo," the Thunder tweeted, including an image of a bullseye. "#BlueAndWhiteScrimmage."

Anthony sported a sleeveless hooded sweatshirt under his No. 7 jersey.

"Hoodie Melo" picked up steam this summer when Anthony was shown in workout videos this offseason while always wearing hooded sweatshirts.

#hoodiemelo in full force at the Blue and White.

Anthony has explained why he started wearing the hoodie.

"Like I was just in the gym and I didn't have a haircut, and I was like, 'I'm just gonna go and throw a hat on," he said at media day last week with the Thunder. "I wanted to sweat, and I just started working back out in the summer. From there, it went to a hoodie and it got out, and the phenomenon started."

While Carmelo Anthony has an 84 overall rating on NBA 2K18, "Hoodie Melo" has a 98 rating.

Carmelo is rated an 84 but #HoodieMelo would become best current player in #NBA2K18. Think @TheRealJRSmith would agree... pic.twitter.com/hzijm9A7OM

Anthony joined the Thunder on Sept. 23. The Thunder sent center Enes Kanter, forward Doug McDermott and a 2018 second-round pick via the Chicago Bulls to the Knicks in the trade.

The Thunder host the Knicks in their first game of the 2017 season at 7 p.m. Oct. 19 at Chesapeake Energy Arena.

NBA // 16 hours ago
Trail Blazers' Nassir Little likely out for season due to shoulder injury
Jan. 27 (UPI) -- Portland Trail Blazers forward Nassir Little is expected to miss the remainder of the season because of a left shoulder labral tear. 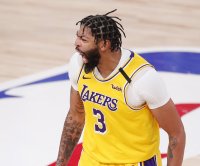 NBA // 4 days ago
Bucks' Grayson Allen suspended a game for 'excessive' foul on Bulls' Alex Caruso
Jan. 24 (UPI) -- The NBA suspended guard Grayson Allen for one game without pay for a hard foul on guard Alex Caruso in the third quarter of a Milwaukee Bucks win over the Chicago Bulls, the league announced.