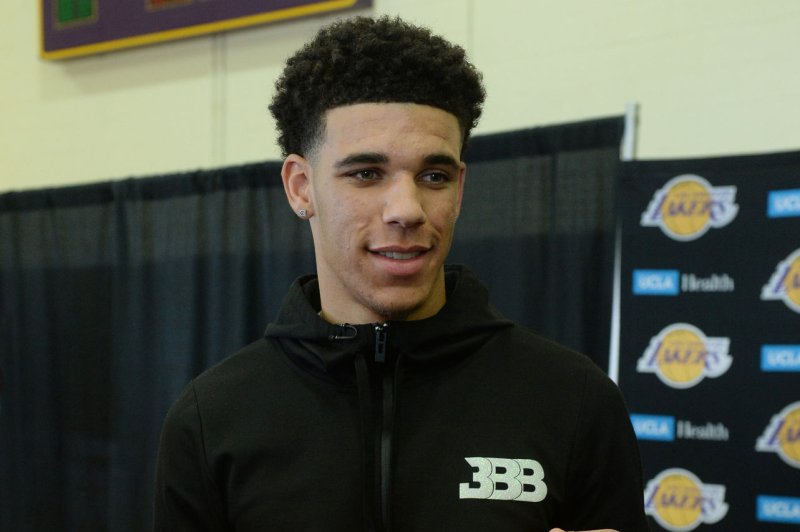 Lonzo Ball holds up his jersey during a news conference to introduce the Los Angeles Lakers draft pick, whom they drafted with the No. 2 overall pick in Thursday's NBA draft at the teams practice facility in El Segundo, California on June 23, 2017. File photo by Jim Ruymen/UPI | License Photo

Ball, the No. 2 overall selection in last month's NBA Draft, has been dealing with the injury since last week, but the ailment is not considered serious.

The Lakers' second overall pick last year, Brandon Ingram, also is out of action after cramping toward the end of the team's first game in Las Vegas on Friday night. Ingram won't play the remainder of the summer league for precautionary reasons.

Rookies Kyle Kuzma (cramps) and Josh Hart (ankle) also are out for the Lakers. Ball, Kuzma and Hart will be re-evaluated Wednesday. The Lakers do not play Tuesday.

Ball's absence prevented an anticipated matchup with fellow rookie point guard De'Aaron Fox, who was taken as the No. 5 pick overall by Sacramento.

When they faced each other in the NCAA Tournament in March, Kentucky beat Ball and UCLA 86-75 behind Fox's career-high 39 points and four assists. Ball had 10 points and eight assists.

Ball did not show any negative effects from the groin injury Saturday, when he produced a triple-double with 11 points, 11 rebounds and 11 assists in the Lakers' 86-81 loss to the Boston Celtics. In his first game in the summer league, Ball shot 2-for-15 from the field, including 1-for-11 from 3-point range, in an overtime loss to the Los Angeles Clippers.

Heading into the Monday game, Fox was averaging 17.5 points, four assists and four steals in his first two games with the Kings in Las Vegas.