New York Knicks Carmelo Anthony walks off of the court after the game against the Charlotte Hornets at Madison Square Garden in New York City on January 27, 2017. The Knicks are actively trying to trade Anthony who has two years and almost $53 million remaining on his contract. Photo by John Angelillo/UPI | License Photo

New York Knicks All-Star forward Carmelo Anthony may now be open to a waiving his no-trade clause to join the Houston Rockets or Cleveland Cavaliers.

The arrival of All-Star Chris Paul to team up with James Harden jumped Houston into contention for Anthony and established his interest in joining the Rockets, league sources told ESPN's Adrian Wojnarowski.

The Cavaliers continue to remain a preferred destination for Anthony because of the presence of LeBron James.

Anthony was a consistent target of former Knicks president Phil Jackson, who pushed Anthony to waive his no-trade clause and leave New York for a team in position to contend for an NBA title.

Jackson parted ways with the Knicks last week after three disappointing seasons in charge of basketball operations. The Knicks were 31-51 in 2016-17, falling well short of expectations with their third consecutive 50-loss season.

Anthony and Jackson were at odds throughout the season because of trade speculation. As the tension grew between the two, Anthony at one point said he wanted to remain with the Knicks and would not waive his no-trade clause.

The Knicks have maintained a stance of wanting significant assets back for Anthony in a trade and have resisted the idea of a contract buyout, according to ESPN.

The 33-year-old Anthony is under contract for two more seasons with $54 million guaranteed and he would receive an additional $8 million should the Knicks trade him. He has an early termination option for the final year of his deal that would allow him to become an unrestricted free agent next summer.

NBA // 2 days ago
Chicago Bulls' Lonzo Ball to undergo knee surgery, out 6-8 weeks
Jan. 20 (UPI) -- Chicago Bulls guard Lonzo Ball will have arthroscopic surgery on his left knee and is expected to miss six to eight weeks, the team announced. 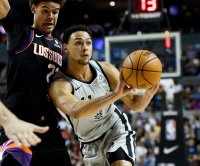