By
Andy Jasner, The Sports Xchange 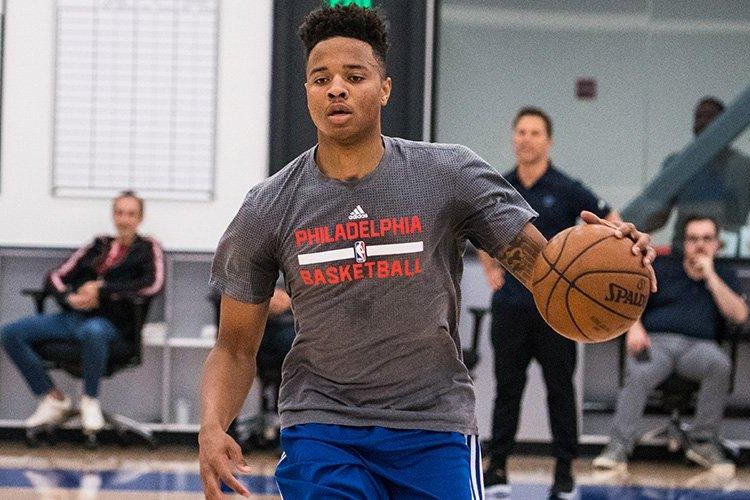 PHILADELPHIA -- For the second consecutive year, the Philadelphia 76ers will have the first overall pick in the NBA draft.

Last season, the Sixers selected LSU standout Ben Simmons, though he never played after suffering a broken bone in his foot toward the end of training camp.

When the ping-pong balls landed in the 2017 draft lottery, Philadelphia came away with the No. 3 overall pick this year. But president of basketball operations Bryan Colangelo pulled off a blockbuster trade with the Boston Celtics, allowing the Sixers to move up two spots to No. 1 again.

It looks like Philadelphia is prepared to take Washington guard Markelle Fultz at No. 1. Paired with Simmons, the Sixers seem to have a rising backcourt for the next 10-to-12 years.

Colangelo was rather vague when meeting with the media. That happens in the days leading up to the draft.

"Most importantly we're taking the next step, I believe, in formulating a solid young core of players that ultimately will lead to a successful and sustainable product," Colangelo said. "That's our goal and that's where we want to be. With the certainty of No. 1, we know we control our circumstances."

While Simmons missed the season, center Joel Embiid was limited to 31 games because of injuries. Forward Jahlil Okafor struggled with a balky knee. Philadelphia stumbled to 28 wins, putting its total number of victories at 75 over the last four seasons.

The Sixers were fortunate in the lottery once again and seem primed to take another step with a high-caliber type of player at No. 1.

"A lot of things are lining up, with hopefully good reason, again to be able to have the opportunity be able to select No. 1 and control our destiny," Colangelo said. " And then have Ben Simmons, and Jerryd Bayless, and others that will be either acquired in the trade or free agency join this mix, along with that developing core that was there, with a healthy Joel Embiid.

"There's a lot of excitement and a lot of reason to move forward with a much further idea of what we have. Again, it is somewhat circumstantial that we're here. Nobody is angry about being here."

If Philadelphia takes Fultz as expected, the rest of the top five in the draft appears to look like this: the Los Angeles Lakers selecting UCLA guard Lonzo Ball at No. 2; the Celtics taking Kansas guard/forward Josh Jackson at No. 3; the Phoenix Suns picking Duke forward Jayson Tatum at No. 4; and the Sacramento Kings selecting Kentucky guard De'Aaron Fox at No. 5.

Of course, Florida State's Jonathan Isaac, Kentucky's Malik Monk and North Carolina State's Dennis Smith could all sneak in the top five because anything is possible on draft night.

This is a particularly crucial draft for the Sixers. It's year five of coach Brett Brown's era and time to start winning for a fan base which has had to "Trust The Process," in honor of former general manager Sam Hinkie.

Philadelphia also owns four second-round picks, acquired in previous trades with the Dallas Mavericks, Atlanta Hawks and Utah Jazz. They could attempt to package some draft picks and move up for another potential first-round pick.

Clearly, the focus is on the No. 1 choice, also known as Fultz.

"It's great excitement, obviously," Colangelo said of the buzz of having the top pick. "We have a much better idea of where we are today than just a few days ago and, again, sitting in the No. 1 spot, we couldn't be in a better place. So, we know where we are, we've got pick certainty now and we can zero in on the fine details of that selection now.

"And plan -- we can get a head start on planning for some of the things that follow that can also help us with our trade thoughts and free-agent thoughts moving forward."