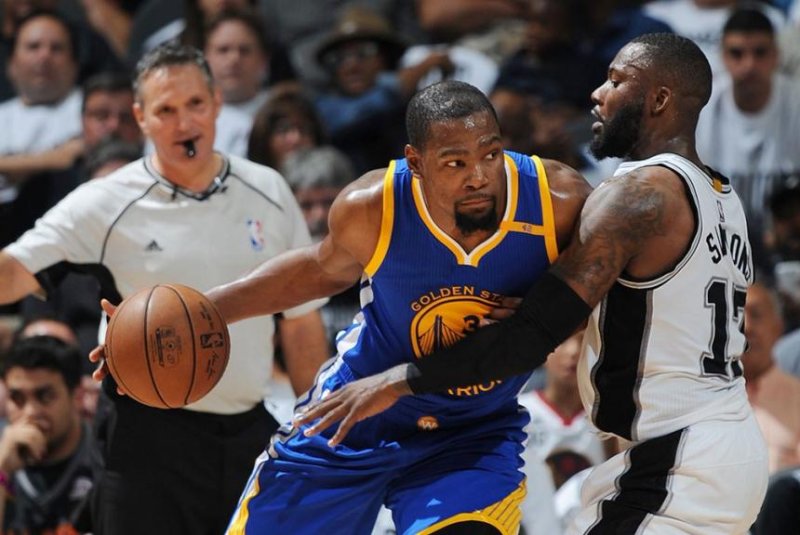 SAN ANTONIO -- In the unlikely event that the prolific Golden State offense needs a pick-me-up, it can turn to forward Kevin Durant, who is capable of jump-starting the Warriors in clutch situations.

Durant provided the spark the Warriors craved when he scored 17 consecutive points in a three-minute stretch of the decisive third quarter on Saturday as the Warriors easily dispatched the San Antonio Spurs 120-108 in Game 3 of the Western Conference finals at the AT&T Center.

The Warriors lead 3-0 in the best-of-seven series with Game 4, a potential clincher for Golden State, set for Monday in San Antonio. No NBA team has ever come back to win a series after losing the first three games.

Durant had 33 points in all, 19 of them in the third period, and pulled down 10 rebounds.

"Yeah, KD got in a groove," Warriors acting coach Mike Brown said. "He was huge for us. Literally, we didn't do anything tricky. He got hot, and we just wanted to keep him in the middle of the floor attacking downhill and in pick-and-roll situations. He was terrific. He made the right play every time down the floor, and obviously he made shots. He is who he is."

San Antonio trailed by nine points at the half and got as close as 69-65 two minutes into the third quarter before Golden State took charge with its superior firepower and unselfish play. By the middle of the fourth quarter, the Spurs were just worn out, settling for shots early in possessions and missing most of them while the Warriors rebuilt an 18-point lead.

"It feels like (San Antonio) can always stay in the game and always put up a fight and win," Durant said. "So we knew especially (with the Spurs) at home, Game 3, a lot of energy in the building, they were going to come out and hit us in the mouth, and we did a good job of taking that punch and just keep playing."

The Spurs' hopes of getting back in this series were severely damaged earlier on Saturday when the team announced that star forward Kawhi Leonard would not play in Game 3 because of a sprained left ankle. Leonard was originally injured in Game 5 of the Western Conference semifinals against the Houston Rockets and re-injured the ankle in Game 1 at Golden State.

Stephen Curry added 21 points for the Warriors, who are a perfect 11-0 in the postseason and have won 26 of their past 27 games.

Klay Thompson had 17 points, JaVale McGee hit for 16 (all in the first half) and Draymond Green tallied 10 points, seven rebounds and seven assists as all five of Golden State's starters scored in double figures. The Warriors outshot San Antonio 54.8 percent to 47.3 percent from the floor.

The Spurs got 21 points from the ageless Manu Ginobili, who hit 7 of 9 shots from the field, and 18 points from LaMarcus Aldridge. Jonathon Simmons added 14 points, and Pau Gasol contributed 12 points and 10 rebounds for San Antonio.

"We knew we were going to be able to bounce back at least emotionally today and play a better game," Ginobili said. "The fact is that it's just too tough. We are missing Kawhi's offense and defense in this series. They were just too much for us today offensively. KD got hot in the moment when we had a chance. They got a lead, and they just played their rhythm and they were better than us."

The Spurs took a 26-25 lead on a 3-pointer by Patty Mills late in the first quarter and expanded it to 33-27 with 1.1 seconds to play on two free throws by Ginobili. The Warriors stole the final points of the quarter and a little of the momentum when David West threw an end-to-end pass to Ian Clark, who caught the ball underneath the Spurs' basket and laid it in as the horn sounded, bringing Golden State within 33-29 at the quarter break.

Golden State surged back into the lead in the middle of the second quarter, building a 61-49 advantage with 1:28 remaining while holding the Spurs scoreless for more than three minutes. San Antonio cut the deficit to 61-55 on a free throw and a basket by Ginobili and a put-back by Aldridge, but West canned a 3-pointer with 10.9 seconds left in the half to grant the Warriors a 64-55 lead at intermission.

McGee led the Warriors with 16 points in the half while Ginobili paced the Spurs with 13 points on 4-for-4 shooting from the floor.

Durant caught fire in the third quarter, hitting on 5 of 6 shots as the Warriors built as much as an 18-point lead before settling for a 100-88 advantage through three quarters. Golden State shot 60 percent in the period (12 of 20) but allowed San Antonio some hope when it committed turnovers on three consecutive possessions.

Spurs reserve forward David Lee was forced from the game with a hyperextended left knee late in the first quarter while hitting a layup and being fouled. Lee went straight to the San Antonio locker room and was not able to return to shoot the free throw he earned, meaning he could not return to the game.

"Our competitiveness was great," San Antonio coach Gregg Popovich said. "Every time you look up, you're playing against four All-Stars, so you better be pretty perfect, and competitiveness-wise I couldn't ask for anything more. We turned it over too much, and we've got to make some more shots. But Golden State is a hell of a team."

NOTES: San Antonio won 33 consecutive home games against the Warriors from the start of the 1997-98 season up until April 10, 2016, when it dropped a 92-86 decision to Golden State for its only home loss on the 2015-16 season. During that stretch, the Spurs posted a 57-13 record against the Warriors. ... In Game 2 of the Western Conference finals, the Warriors dished out a franchise-record 23 assists in the first half on the way to a 2017 playoff-high 39, one shy of the team playoff record. ... San Antonio coach Gregg Popovich served as an assistant for the Warriors under Don Nelson's staff from 1992-93 through the 1994-95 season. ... Warriors coach Steve Kerr had two playing stints with San Antonio, appearing in 131 games while averaging 3.5 points from 1998-2001 and in 75 games during the 2002-03 season while helping lead the Spurs to their second NBA championship.