Westbrook compiled his fourth consecutive triple-double and his 38th of the season, leaving him three shy of the NBA record held by Hall of Fame guard Oscar Robertson. His 57 points were one shy of his career high.

The Thunder won for the eighth time in 10 games. The Magic, who got 24 points from Evan Fournier, lost their second straight game.

SAN ANTONIO -- Stephen Curry scored 29 points, 13 of them in the pivotal third quarter, as Golden State came back from an early 22-point deficit to defeat San Antonio in a slugfest between the top two teams in the NBA.

Curry's shooting in the third quarter pushed the Warriors to the lead and fellow Splash Brother Klay Thompson's nine points in the first five minutes of the fourth kept them there. Golden State trailed 29-7 with 3:29 remaining in the first quarter and made just two of its first 12 shots.

Thompson finished with 23 points, and former Spur David West poured in 11 of his 15 points in the final quarter. Kawhi Leonard paced San Antonio with 19 points.

BOSTON -- Surging Milwaukee knocked Boston from the top spot in the Eastern Conference with a hard-fought victory over the Celtics.

In winning for the 13th time in 16 games, the Bucks, hanging on to a tie for the fifth spot in the Eastern Conference, ended Boston's six-game home winning streak and handed the Celtics their second loss in their last 16 home games.

The Celtics, who moved into sole possession of first place when the Cavaliers lost at San Antonio on Tuesday night, dropped percentage points behind Cleveland for the conference lead.

Josh Richardson contributed 17 as eighth-place Miami moved 1 1/2 games ahead of the ninth-place Chicago Bulls in the race for the last Eastern Conference playoff spot. Tyler Johnson chipped in 12, and Hassan Whiteside collected 11 and nine rebounds.

Paul George led the Pacers with 22 points, and Aaron Brooks scored 18. Thaddeus Young finished with 16 points and 13 rebounds. Indiana slipped into a tie for seventh place in the East with the Miami Heat, both teams 1 1/2 games ahead of the Chicago Bulls in the race for the conference's last two playoff spots.

TORONTO -- Kemba Walker scored the go-ahead 3-pointer in the final minute, and Charlotte came back to defeat Toronto.

Walker finished with 19 points and Marco Belinelli scored 21 as the Hornets ended a six-game winning streak by the Raptors and evened the season series between the teams at 2-2.

Marvin Williams added 18 points and 12 rebounds for the Hornets, Nicolas Batum had 15 points, and Frank Kaminsky chipped in with 13.

Kent Bazemore, playing his first game after missing the previous five with a bruised right knee, added 19 points for Atlanta. Tim Hardaway Jr. also had 19 for the Hawks, who won their second straight game to remain in fifth place in the Eastern Conference.

Ersan Ilyasova, playing his first game in Philadelphia since he was traded on Feb. 22, had 14 for the Hawks, all in the first half. Dennis Schroder contributed 14 as well.

Cousins chipped in 16 rebounds and Davis grabbed 13 as the Pelicans moved past the Mavericks into 10th place in the Western Conference, 4 1/2 games behind Portland, which is in the lead for the eighth and final playoff spot.

SACRAMENTO, Calif. -- Ten players scored during a 50-22 Utah Jazz run spanning the third and fourth quarters, and Utah held on to beat Sacramento.

Gordon Hayward returned to the lineup after a one-game absence to score 20 points for Utah, and Rodney Hood tallied 18. The Jazz remain 1 1/2 games ahead of the Los Angeles Clippers in the race for the fourth playoff spot in the Western Conference and home-court advantage in the first round of the playoffs.

Blake Griffin collected 26 points, 10 rebounds and nine assists, while DeAndre Jordan finished with 23 points and 18 boards for the Clippers. Jamal Crawford added 14 points. The win kept the Clippers 1 1/2 games behind the Utah Jazz for fourth place in the Western Conference playoff race.

Washington got 41 points from John Wall and 27 from Bradley Beal. 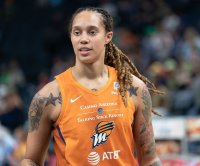 NBA // 4 days ago
Griner, Taurasi lead Mercury over Sky, tie WNBA Finals 1-1
Oct. 14 (UPI) -- Brittney Griner scored a game-high 29 points and Diana Taurasi scored 18 of her 20 points in the second half and overtime to lead the Phoenix Mercury over the Chicago Sky in Game 2 of the WNBA Finals, tying the series.