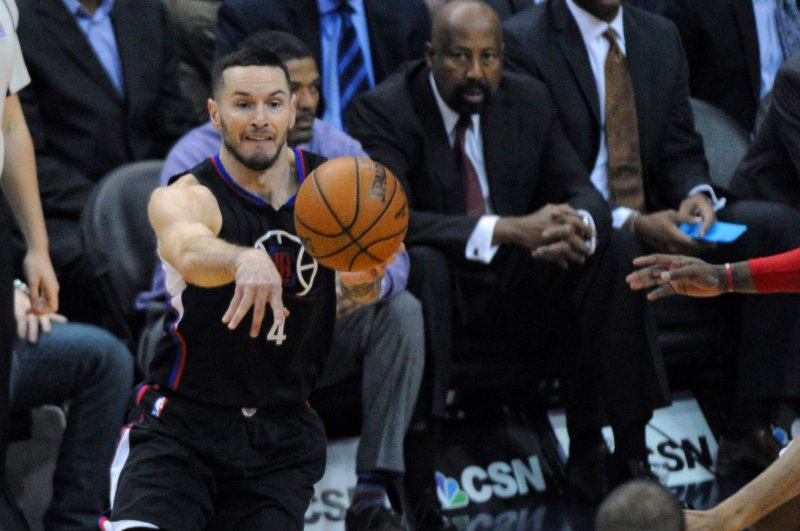 LA Clippers guard J.J. Redick (4) makes a pass against the Washington Wizards in the first half at the Verizon Center in Washington, D.C. on December 18, 2016. Photo by Mark Goldman/UPI | License Photo

The win kept the Clippers (45-31) 1 1/2-games behind the Utah Jazz for fourth place in the Western Conference playoff race. The Clippers are a game ahead of the Oklahoma City Thunder.

John Wall had 41 points, eight assists and seven rebounds for the Wizards. Bradley Beal scored 27 points, and Markieff Morris and Jason Smith chipped in 14 points apiece. Morris was ejected in the third quarter.

The Wizards (46-29) are two games back of the Eastern Conference's co-leaders, the Boston Celtics -- who lost Wednesday night to the Milwaukee Bucks -- and the Cleveland Cavaliers. Washington is one game ahead of the fourth-place Toronto Raptors.

The Clippers set season high for first-half points as they built a 74-63 lead at the break. Los Angeles shot 58.7 percent to 49 percent for Washington in the first half.

Overall, the Clippers outshot the Wizards 56.6 percent to 49.5 percent.

A 3-pointer by Beal sliced the gap to 129-124 with 30 seconds left but two foul shots by Griffin with 18.2 seconds remaining clinched the win for Los Angeles.

NOTES: Clippers G Austin Rivers (sore left hamstring) left the game in the first half and did not return. ... Clippers coach Doc Rivers said Wizards G John Wall would receive some serious consideration for MVP if not for the fantastic seasons being played by Oklahoma City Thunder G Russell Westbrook and Houston Rockets G James Harden. "He's had an amazing season." Rivers said. "If it wasn't for those other two guys, people would probably be talking about him. And not just in basketball, but I think in his leadership. (He's) a different player." ... The Wizards visit the Utah Jazz on Friday. ... The Clippers travel to Phoenix to play the Suns on Thursday.