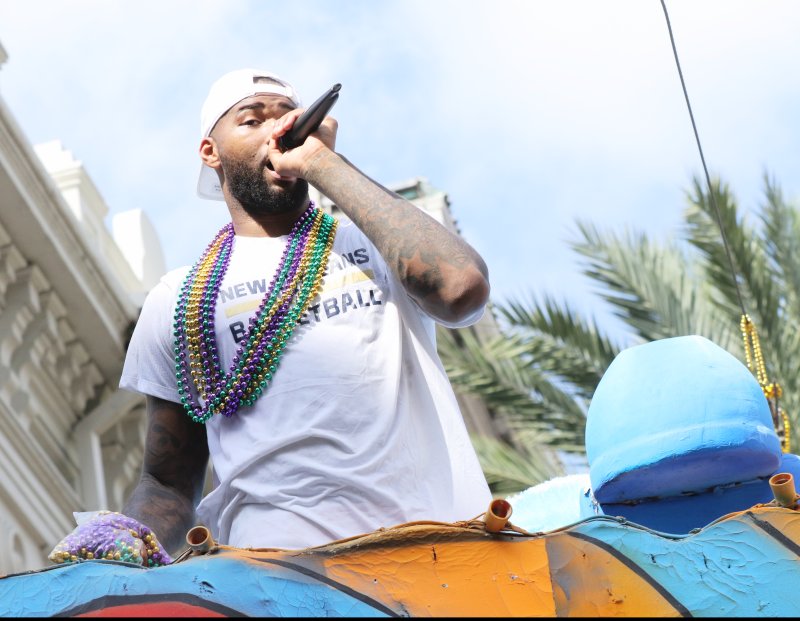 Pelicans teammates DeMarcus Cousins (front) and Anthony Davis warm up prior to game against the Lakers at Staples Center in Los Angeles, March 5, 2017. Photo by Jon SooHoo/UPI | License Photo

NEW ORLEANS -- Anthony Davis and DeMarcus Cousins both exceeded their lofty scoring averages for the New Orleans Pelicans on Wednesday.

On top of that, they had three teammates score in double figures, and the Pelicans needed all of that offense to hold off the Dallas Mavericks 121-118 at the Smoothie King Center.

Davis and Cousins both surpassed their scoring averages by two points as Davis finished with 30 and Cousins had 29.

"They're for sure in a groove," said Pelicans guard Jrue Holiday, who added 18 points. Teammates Dante Cunningham and Jordan Crawford had 15 each.

"We're all learning each other," said Cousins, who was acquired in a trade with Sacramento during the All-Star break last month. "It's still a process, but we're on the right path. Every game we're getting better."

Cousins chipped in 16 rebounds and Davis had 13 as the Pelicans (32-43) moved past the Mavericks (31-43) into 10th place in the Western Conference, 4 1/2 games behind the Portland Trail Blazers for the final playoff spot.

Though New Orleans' playoff hopes are faint, the Pelicans have won seven of the past 10 games, averaging 112.6 points during that stretch compared to 102.6 the rest of the season.

It came easy for both teams. Only three Pelicans that played failed to score at least 15 points.

Dallas used 11 players and each of them scored. Dirk Nowitzki led the way with 23 points, Harrison Barnes scored 19, Seth Curry had 18, Yogi Ferrell 15 and Wesley Matthews 10.

"Our first half was sub-par," Mavericks coach Rick Carlisle said. "Our second half was terrific. When you're on the road against teams who are really playing for something, you need to have two terrific halves to win."

The Pelicans led by 12 points at halftime, but the Mavericks scored the first 10 points of the third quarter.

Cousins stopped the run by converting a three-point play, and Davis scored 10 consecutive New Orleans points as the Pelicans took an 84-72 lead.

Dallas got within two points once and three points six times, but the Pelicans never relinquished the lead. The Mavericks' only chance to tie came at the very end, but Matthews' 3-pointer missed at the buzzer.

"We showed some fight in the second half, but we were a step slower than they were," Nowitzki said. "They got whatever they wanted in the first-half, but we fought. We came out right away and had a nice little run to get back in the game, but down the stretch I just feel like we couldn't get stops in a row to really make it interesting.

"We always kept it around five, but we just could not find a way to get it down to three or tie it. But give them credit. Their big guns were on. Crawford hit big shots from the bench and we were in for a long night."

NOTES: Pelicans C Anthony Davis extended to four his streak of consecutive games with at least 30 points and 13 rebounds. He entered with a streak of three consecutive games with 30 and 15 before the NBA changed two rebounds he was credited with against Denver last Sunday, leaving him 13 rebounds in that game. ... F DeMarcus Cousins returned to the Pelicans' lineup after missing two games due to a sprained ankle. ... Mavericks G Devin Harris was ejected in the second quarter after receiving two technicals for vehemently arguing a foul call against him. ... New Orleans signed G Quinn Cook to a second 10-day contract. ... Dallas G Seth Curry returned to the lineup after a one-game absence to rest a sore shoulder. ... Mavs C Salah Mejri missed the game because of a sore knee, and coach Rick Carlisle said he hopes Mejri will be back for the team's next game at Memphis on Friday. ... The game started a five-game trip for Dallas and a four-game homestand for New Orleans.