Chicago Bulls' Taj Gibson (L) dunks the ball over Toronto Raptors' DeMar DeRozan in the first quarter of their game February 19, 2016, at the United Center in Chicago. The Bulls defeated the Raptors 116-106. Photo by Frank Polich/UPI | License Photo

Chicago Bulls forward Doug McDermott (L) goes up for a shot as Washington Wizards forward Otto Porter Jr. defends during the fourth quarter at the United Center in Chicago on March 3, 2015. The Bulls defeated the Wizards 97-92. Photo by Brian Kersey/UPI | License Photo

Along with Gibson, the Thunder obtained small forward Doug McDermott and a 2018 second-round pick from Chicago. The Bulls eceived reserve guards Cameron Payne and Anthony Morrow along forward Joffrey Lauvergne.

Gibson was Chicago's first-round pick in 2009 and averaged 9.4 points and 6.4 rebounds in 562 regular-season games. This season, he is averaging 11.6 points and seven rebounds in 55 games while shooting 52.1 percent.

Gibson will be an unrestricted free agent after this season and the Bulls appeared to be motivated to move him instead of losing him for nothing in free agency like with Pau Gasol after last season.

Gibson's acquisition occurred a day after forward Enes Kanter returned to practice for the first time since breaking his arm hitting a chair on Jan. 26.

In the final three games before the All-Star break, McDermott scored 47 total points.

Payne averaged 5.3 points in 20 games for the Thunder. He missed the first two-plus months of the season following right foot surgery.

Lauvergne was obtained from the Denver Nuggets in August for a pair of second-round picks in this year's draft. In 50 games for the Thunder, he averaged 5.7 points and 3.7 rebounds and 14.8 minutes per game. 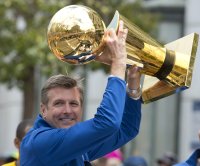