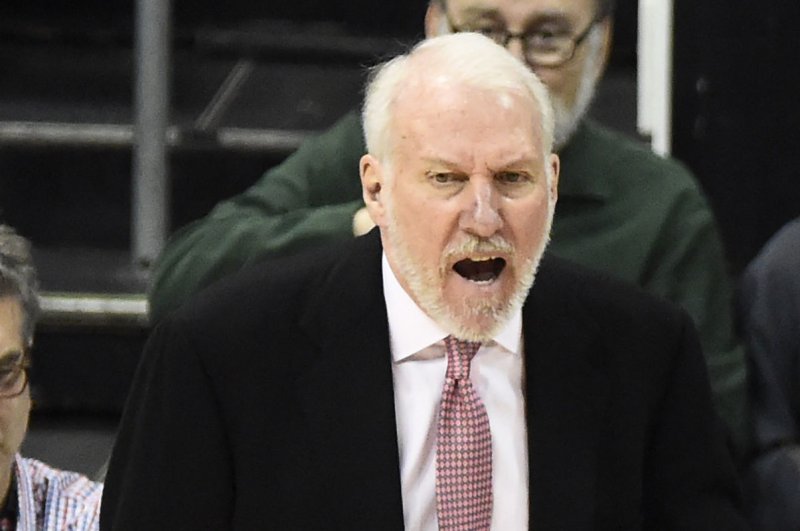 SAN ANTONIO -- Two of the players most responsible for Gregg Popovich's continued coaching success, Manu Ginobili and Tony Parker, were major contributors Saturday night in the San Antonio Spurs' 121-97 win over the Denver Nuggets that allowed Popovich to move to the top of the standings for coaching wins with one franchise in league history.

Ginobili and Parker, each of whom have played their entire NBA careers with Popovich as their coach, scored 18 points apiece and combined to make 13 of 14 shots from the floor as the Spurs used a 21-7 run at the start of the third quarter to turn a tight game into a runaway at the AT&T Center.

Popovich, in his 21st season leading the Spurs, has compiled a 1,128-496 record since replacing Bob Hill as San Antonio's coach on Dec. 10, 1996 (after the 18th game of the 1996-97 season) and passed former Utah coach Jerry Sloan. Legendary Boston Celtics coach Red Auerbach is third on the list with 795 wins.

The record was such a non-story to the always-succinct Popovich that he didn't even address the milestone in his short postgame press conference. Nor did the team recognize the record with any ceremony after the victory.

Ginobili was 5 of 6 from the floor (4 of 6 from 3-point territory) and made all four of his free throws while reaching his season scoring high in just 10 minutes, all in the first and second quarters.

Parker played into the first half of the third quarter in the blowout, hitting all eight of his shots from the field and both of his free throws.

RELATED No. 24 Florida trounces No. 8 Kentucky

"We moved the ball very well and kind of exploited that the Nuggets played yesterday and have a few injuries," Ginobili said. "We were more dynamic than we've been in the past few games. The truth is that we haven't been playing that well, so we're looking forward to keep improving."

"It was a good second half," Popovich said. "We had 17 assists in the second half and only had four turnovers and that was basically the ballgame. Defensively, we did better."

Denver, playing without leading scorer Danilo Gallinari, was led by Jamal Murray's 20 points off the bench. Nikola Jokic added 11 points and Wilson Chandler had 10 for the Nuggets (22-28).

Ginobili scored 10 points in the first quarter as the Spurs hit on nine of their 18 shots, including 3 of 4 from beyond the arc in taking a 30-27 lead after 12 minutes.

Chandler's 10 points and Murray's running 3-pointer at the buzzer to end the quarter kept the Nuggets within striking distance.

Two free throws by Ginobili with 1:50 left in the second quarter accounted for his 17th and 18th points, exceeded his season high in scoring and pushed the Spurs to a 52-44 lead.

San Antonio settled for a 56-50 advantage at the half despite outshooting Denver 52.9 percent to 42.9 percent from the floor and converting 15 of 18 free throws. Denver was just 3 of 6 from the line in the first two quarters.

Ginobili led all scorers in the half with 18 points and Parker added 12 on a 5-of-5 showing from the floor. Chandler's 10 points, all in the first quarter, paced Denver.

The 21-7 run to open the third quarter expanded San Antonio's lead to 77-57 with 5:11 left. Leonard had eight points and Parker contributed six in the run, which was aided by Denver's 2-of-11 shooting from the floor in the first seven minutes of the quarter.

"It the same story every time we play the Spurs -- the group that started the third quarter was awful," Denver coach Michael Malone said. "Six turnovers in that stretch killed us -- we just caved in.

"I realize San Antonio is a very good team, I realize we are on the road, I realize we are playing our fourth game in five nights, but if we really want to be a playoff team, then those are just excuses. If we lose those excuses, we are going to be a losing basketball team."

The Nuggets tried to rally behind Jokic and Murray, but the Spurs finished the quarter with a 3-pointer by Mills with 1.2 seconds remaining and took a 91-72 advantage to the fourth quarter.

Simmons scored nine of the Spurs' first 11 points in the fourth quarter as San Antonio pushed the lead to 24 points in the first three minutes of the quarter and emptied its bench.

"The Spurs don't beat themselves, and we had some turnovers, careless ones, that we could have controlled," Nuggets guard Emmanuel Mudiay said. "We need a little bit more sense of urgency with our defense, too. We have no choice but to move forward."

NOTES: The Spurs are now 3-0 against Denver this season, also winning 127-99 on Jan. 5 in the Mile High City and 118-104 on Jan. 19 in San Antonio. ... The Spurs will be away from home for their next eight games (and nine of its next 10) for their annual Rodeo Road Trip, facilitated by the takeover of the AT&T Center by the San Antonio Stock Show and Rodeo. ... Nuggets C Nikola Jokic posted his first career triple-double on Friday in Denver's win over Milwaukee with 20 points, 13 rebounds and 11 assists in 32 minutes. ... The most points Denver has ever scored in a half as a member of the NBA came at San Antonio on Nov. 7, 1990, reaching 90 in the first half. ... Conversely, San Antonio held the Nuggets to an NBA record-low three points in the first quarter on Nov. 27, 2002.