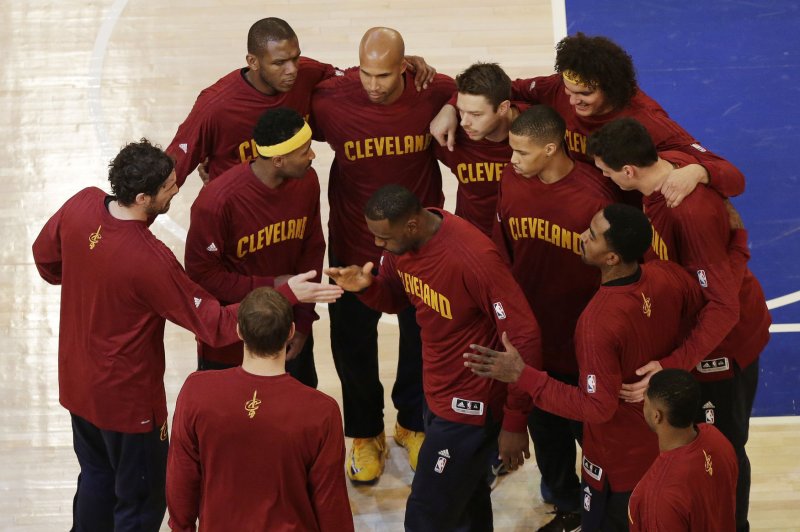 Kyrie Irving, LeBron James and Kevin Love combined for 80 points and the Cleveland Cavaliers blew a 20-point third-quarter lead but hung on to beat the Phoenix Suns 120-116 on Sunday. File Photo by John Angelillo/UPI | License Photo

PHOENIX -- Kyrie Irving, LeBron James and Kevin Love combined for 80 points and the Cleveland Cavaliers blew a 20-point third-quarter lead but hung on to beat the Phoenix Suns 120-116 on Sunday.

James had 12 of his 28 points in the fourth quarter, including two 3-pointers 25 seconds apart to stretch a two-point Cleveland edge to a 115-109 lead with 2:47 left. Irving scored 27 points and Love added 25 points for Cleveland, which beat Phoenix for the fourth straight time.

Eric Bledsoe had 31 points and Devin Booker added 28 for the Suns, who missed a chance for their first three-game winning streak since Nov. 12-16, 2015.

SACRAMENTO, Calif. -- Losers after putting up a 24-point lead in their previous contest, Golden State overcame a lethargic first half thanks to 17 second-half points from Stephen Curry and beat Sacramento at the Golden 1 Center.

Rudy Gay, playing in only his second game since missing nine of 10 because of a hip flexor, scored a game-high 23 points for Sacramento, but the Kings lost the first three on a season-high seven-game homestand, and welcome defending champion Cleveland on Friday.

TORONTO -- James Harden scored 40 points and added 11 assists and 10 rebounds for his 10th triple-double of the season and Houston came back to defeat Toronto to extend 9ts winning streak to eight games.

Harden has had at least a double-double in 17 straight games. Montrezl Harrell scored 28 points and Eric Gordon added 19 -- both off the bench -- and Trevor Ariza had 17 points for Houston.

DeMar DeRozan led Toronto with 36 points and DeMarre Carroll added 26. Kyle Lowry scored 12 and Norman Powell and Cory Joseph had 10 each for the Raptors, who have lost two in a row.

The Jazz committed 18 turnovers that Memphis turned into 26 points. Forward Gordon Hayward led the Jazz with 22 points and forward Trey Lyles chipped in 11 points off the bench.

Reggie Jackson scored 31 points, Andre Drummond contributed 28 points and 14 rebounds, and Caldwell-Pope added 26 points for the Pistons. Detroit, which edged the Charlotte Hornets on Thursday, won consecutive games for the first time in more than a month.

CJ McCollum scored 35 points, Allen Crabbe came off the bench for a career-high 30 points and Damian Lillard collected 20 points and nine rebounds for the Trail Blazers.

Evan Fournier, Serge Ibaka and Nikola Vucevic paced the Magic with 19 points each. Ibaka also grabbed 10 rebounds while Bismark Biyombo had 10 points and 11 rebounds for Orlando, which has lost five of its last six contests.

NEW YORK -- Rookie Joel Embiid scored 20 points in 24 minutes as Philadelphia rallied from an 11-point halftime deficit and matched its win total from last season with a victory over Brooklyn .

Dario Saric also scored 18 and came within three of his career high as the Sixers won for the third time in four games and improved to 6-8 in their last 14 games. Robert Covington overcame getting poked in the eye twice and added 15 while Ersan Ilyasova contributed 14 as Philadelphia won despite shooting 39.4 percent.

Brook Lopez ended a streak of four straight games under 20 points and scored 26 points, but only eight were after halftime when the Nets. Justin Hamilton added 14 and Bojan Bogdanovic had 14 and eight as the Nets committed 22 turnovers and dropped their sixth straight.

MILWAUKEE -- Jabari Parker scored 28 points and Malcom Brogdon added a career-high 22 but it wasn't enough for Milwaukee to overcome Bradley Beal and John Wall, who combined for 42 to lead Washington to victory.

Beal scored 27 while Wall added 16 for the Wizards, who also got 20 from Markieff Moriss and 17 from Kelly Oubre, Jr. Washington shot 48.8 percent from the floor and knocked down 10 of 32 3-pointers.

Giannis Antetokounmpo, Milwaukee's leader in every major statistical category, was a late scratch due to illness so Mirza Teletovic got the start in his place while Michael Beasley and veteran Jason Terry also saw extended action.

Chris Paul added 19 points, 18 assists and six rebounds for the Clippers, who won their fourth in a row. The number of assists allowed Paul to top 8,000 career assists. Paul now has 8,012. Marreese Speights delivered 19 points off the bench for Los Angeles. Brandon Bass contributed 12 points.