We're pretty excited about it. #PHILAfirst

NEW YORK -- The Philadelphia 76ers will continue their rebuild through the draft, and they'll be doing so with the No. 1 overall pick this year.

Philadelphia was awarded the top pick in the 2016 NBA draft after Tuesday night's lottery in New York, marking the third time in franchise history the team will be on the clock first.

"It gives us the injection that we need," said 76ers coach Brett Brown, who represented his team on stage during the lottery. "We're all excited around our program to begin with."

The 76ers, a league worst 10-72 this season, entered Tuesday's lottery with the greatest odds at landing the top pick at 25 percent. The Los Angeles Lakers and Boston Celtics had the next best odds and wound up with the No. 2 and No. 3 picks, respectively.

Phoenix and Minnesota got the No. 4 and No. 5 picks respectively in the lottery, which did not deviate from the statistical projections.

In the following order, New Orleans, Denver, Sacramento, Toronto and Milwaukee round out the top ten while Orlando, Utah, Phoenix and Chicago have picks Nos. 11-14.

Philadelphia last picked first in 1996, selecting Allen Iverson -- a former MVP and 11-time All-Star who is being inducted into the Basketball Hall of Fame this summer. The team also took Doug Collins in the top spot in 1973.

Philadelphia had the No. 3 picks in each of the past two drafts, taking Duke's Jahlil Okafor in 2015 and Kansas' Joel Embiid two seasons ago.

In 2013, the 76ers acquired No. 6 overall pick Nerlens Noel in a draft-day trade with the New Orleans Pelicans.

"Last three years were brutally hard," said 76ers co-managing owner Josh Harris, referring to his team's dismal 47-199 record during that stretch. "This has been our plan, and we're sticking with our plan and we're moving forward."

With Okafor, Embiid and Noel all on the roster, the 76ers will likely stay away from drafting another big man.

"We feel like we have a great stock pile of NBA bigs," Brown said. "Ultimately, we really need to assess our point guard position."

One big that might catch Brown's eye, however, is LSU forward Ben Simmons.

Simmons, a 19-year-old Australian forward, won the SEC's Freshman of the Year Award after averaging 19.2 points, 11.8 rebounds and 4.8 assists in 33 games for the Tigers.

"I've known Ben since he was born," said Brown, who said he coached Simmons' father while living in Australia for 17 years. "Just having that knowledge of where he was raised and understanding the culture (is helpful)."

If Simmons goes to the Sixers, the Lakers -- in search of a franchise centerpiece following Kobe Bryant's retirement -- may very well draft Duke forward Brandon Ingram.

The 18-year-old Ingram helped the No. 4 seeded Blue Devils reach this year's Sweet 16. The forward was the ACC's Rookie of the Year, averaging 17.3 points and 6.8 boards over 36 games.

Los Angeles got a lucky bounce in landing the No. 2 pick -- if it had fallen outside of the top three, it would have gone to Philadelphia per a prior trade agreement.

Boston, in need of a scoring wing and bigs, could have fallen all the way down to No. 6.

"I'm glad we didn't get six," said Celtics All-Star guard Isaiah Thomas, one of his team's representatives at the lottery. "I'm okay with three. Hopefully the fans and the organization's okay with it."

The Celtics have shown interest in Marquette forward Henry Ellenson.

Simmons was not in attendance at Tuesday's lottery, but Ingram was. Oklahoma's Buddy Hield also attended, as did draft-eligible Kentucky teammates Jamal Murray and Skal Labissiere.

The draft takes place June 23 at the Barclays Center in Brooklyn.

NOTES: Dikembe Mutombo, who helped the 76ers reach the 2001 NBA Finals, congratulated the team on winning the lottery on his Twitter account hours before the results were announced. "Congrats to Sixers on grabbing the (No. 1) spot in the NBA Draft," Mutombo's tweet said before it was deleted. ... Minnesota C Karl-Anthony Towns, one of his team's representatives at Tuesday's lottery, wore Flip Saunders' wedding ring on a necklace on stage. Saunders coached the Timberwolves for 11 seasons and served as the team's president of basketball operations until his death last October. ... Bulls G Jimmy Butler, Kings C Willie Cauley-Stein, Suns G Devin Booker also represented their respective teams at the lottery. ... Denver coach Michael Malone, Milwaukee coach Jason Kidd, New Orleans coach Alvin Gentry represented their teams. 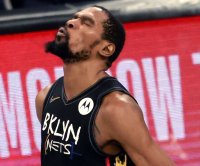 NBA // 2 days ago
Kawhi Leonard, Paul George lift Clippers over Jazz in Game 4
June 15 (UPI) -- Kawhi Leonard and Paul George poured in 31 points apiece to lead the Los Angeles Clippers to a Game 4 victory against the Utah Jazz to tie the Western Conference Semifinals series at 2-2.