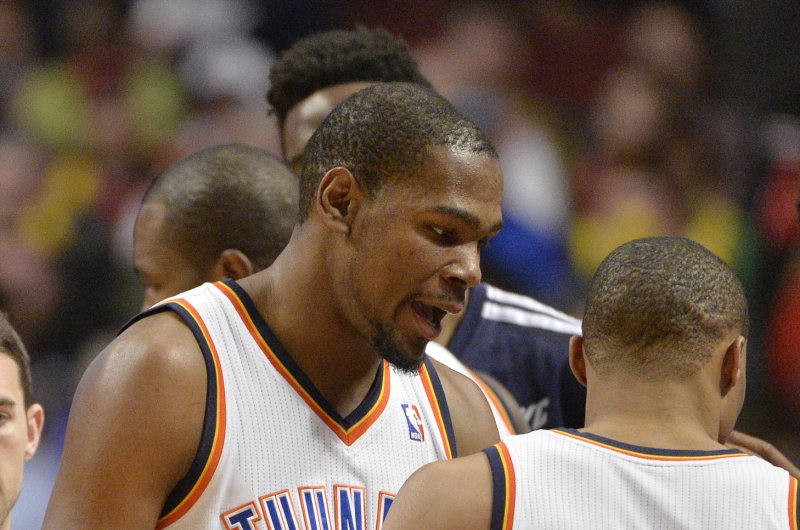 DENVER -- Guard Russell Westbrook and forward Kevin Durant each had a double-double, and the streaking Oklahoma City Thunder beat the Denver Nuggets 110-104 on Tuesday night.

Westbrook finished with 27 points and 12 assists but fell short of his third straight triple-double. He has five this season and 24 in his career.

Durant had 30 points and 12 rebounds and forward Enes Kanter had 25 points and eight rebounds off the bench.

Myles Turner contributed 15 points and Joe Young had 11 off the bench for the Pacers, who hadn't won since beating the Suns 116-97 in Indiana on Jan. 12.

Rookie Devin Booker had a career-high 32 points including six 3-pointers for the Suns, who lost their fifth in a row and 14th in the past 15 games. And things got a lot worse for Phoenix on Tuesday.

Already without leading scorer Eric Bledsoe and backup point guard Ronnie Price, the Suns lost all three of their power forwards over the space of an hour.

MIAMI -- Khris Middleton scored 22 points, and Milwaukee continued its recent mastery of Miami with a victory at AmericanAirlines Arena.

Greg Monroe had 15 points and 10 rebounds, and Giannis Antetokounmpo added 14 points to lead the tall Milwaukee attack that gives Miami so much trouble.

The Bucks have won five straight against the Heat, sweeping all four games last season. Milwaukee won its third consecutive game overall. Miami lost its second game in a row. Hassan Whiteside had 23 points and 18 rebounds, and Chris Bosh added 23 points, but the Heat fell to 6-8 at home against Eastern Conference teams this season.

NEW ORLEANS -- Anthony Davis scored 22 of his game-high 35 points in the first half and helped erase a 17-point deficit to lead New Orleans to a victory over Minnesota at the Smoothie King Center.

In winning for the third time in four games, the Pelicans roared back from a 38-21 first-quarter deficit. It was the fifth time this season Minnesota (13-30) had lost a lead of at least 17 points.

New Orleans held Minnesota scoreless for 10 consecutive possessions at the end of the third quarter and the beginning of the fourth quarter to pull away. Jrue Holiday had 19 points and seven assists and Tyreke Evans added 13 points and five assists for the Pelicans.