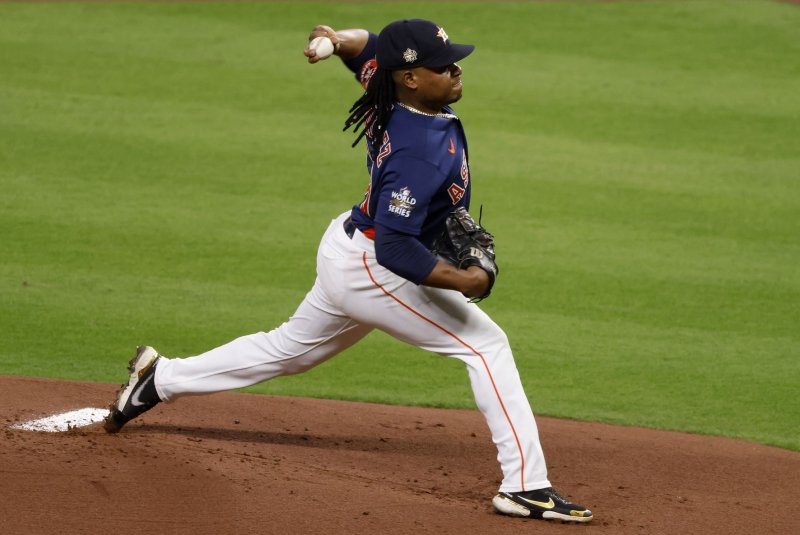 Houston Astros starting pitcher Framber Valdez delivers to the Philadelphia Phillies in the first inning of Game 6 of the 2022 World Series on Saturday at Minute Maid Park in Houston. Photo by John Angelillo/UPI | License Photo

Nov. 5 (UPI) -- Yordan Alvarez smashed a 450-foot, go-ahead homer in the sixth inning to lead the Houston Astros past the Philadelphia Phillies in Game 6 of the World Series and clinch the title Saturday at Minute Maid Park in Houston.

"It was amazing," Alvarez told Fox Sports. "When I was rounding second base, I felt the whole stadium moving."

"This is the greatest bunch of guys," Astros manager Dusty Baker said. "They told me in spring training that they were going to win it."

Alvarez, who hit three game-winning homers this postseason, went 1 for 4. Astros shortstop Jeremy Pena was the only player to record multiple hits in Game 6. He went 2 for 4 with a run scored, and was named World Series MVP.

"This is what we dream about," Pena said. "These guys kept me within myself."

Valdez and Wheeler kept the game scoreless early on. The Phillies then jumped ahead 1-0 when outfielder Kyle Schwarber led off the sixth inning with a 395-foot solo homer to right field.

Wheeler hit Astros catcher Martin Maldonado with a pitch to lead off the bottom half of the inning. Pena singled two at-bats later, which put two players on base for Alvarez.

Alvarez fouled off the first pitch he saw from Phillies relief pitcher Jose Alvarado. He then hit a 2-1 sinker to center field for a three-run homer.

Astros designated hitter Christian Vazquez hit an RBI single later in the inning for the final run of the night. Astros relief pitchers Hector Neris, Bryan Abreu and Ryan Pressly pitched the final three innings of the game to secure the win.

The Houston Astros celebrate with the Commissioner's Trophy after defeating the Philadelphia Phillies 4-1 during Game 6 of the World Series at Minute Maid Park in Houston on November 5, 2022. Photo by John Angelillo/UPI. | License Photo