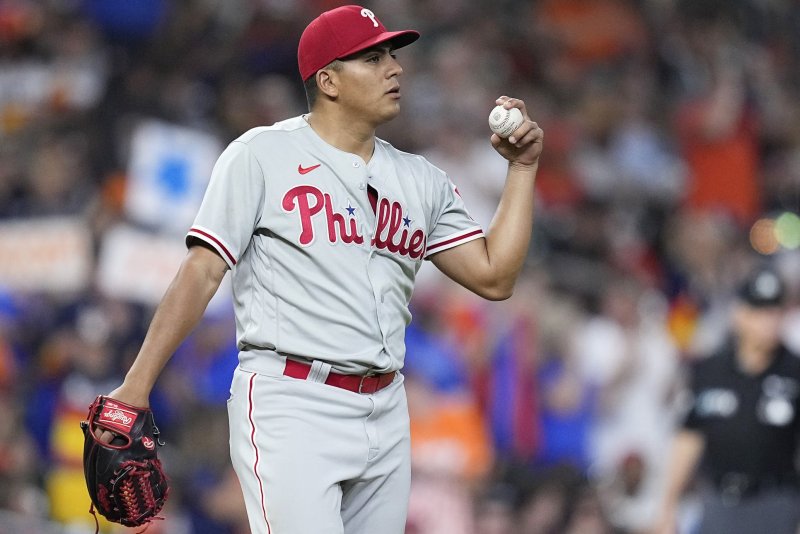 Nov. 1 (UPI) -- MLB's decision to push remaining World Series games back by one day due to a Game 3 weather interruption will give all pitchers extra day of rest, but most likely gives the Philadelphia Phillies' more shallow staff extra help.

Game 4 was moved Wednesday and Game 5 to Thursday in Philadelphia. The final two games of the series, if necessary, will be Saturday and Sunday in Houston.

All World Series games will still air on Fox.

The Phillies went with starter Aaron Nola in their Game 1 win Friday in Houston. The Astros started ace Justin Verlander in that loss. Framber Valdez allowed just four hits and one run over 6 1/3 innings to lead the Astros to a Game 2 win. The Phillies started Zack Wheeler in that loss.

The Phillies initially planned to start Noah Syndergaard, but to use a bullpen-heavy strategy in Game 3, after they used projected starter Ranger Suarez out of the bullpen in Game 1.

The extra day of rest instead allows the Phillies to bring back Suarez as a starter, which could tax their bullpen less. Vital bullpen arms Jose Alvardo, Seranthony Dominguez, Zach Eflin and David Robertson now could see more work later in the series.

Phillies manager Rob Thomson told reporters Monday that Suarez now is in the picture for a potential Game 7 start.

The Phillies plan to start Nola again in Game 4 after he gets his usual four days of rest between assignments. They plan to start Syndergaard in Game 5, if he isn't used as a bullpen option in Game 3 or Game 4.

The series shuffle will provide and additional day of rest for Wheeler, the Phillies' Game 6 starter. Thomson said Wheeler was "fatigued."

"He is fine," Thomson told reporters, when asked about Wheeler. "It's late in the season. His velocity has dropped a little bit. He's fatigued. I just feel like he needs more time."

Phillies pitcher Kyle Gibson isn't expected to start, but could in Game 5, if necessary. Thomson said Gibson should be used out of the bullpen as a long reliever.

Nola allowed six hits and five runs in the Phillies' Game 1 win. The All-Star right-handed pitcher went 11-13 with a 3.25 ERA this season. He has a career postseason 4.57 ERA over four games.

Syndergaard, a right-handed pitcher, went 10-10 with a 3.94 ERA this season. The 2016 All-Star has a career 2.30 ERA over eight postseason appearances. He allowed seven hits and three runs in a World Series appearance in 2015 for the New York Mets.

Verlander went 18-4 with a 1.75 ERA in regular season. The two-time Cy Young Award winner is 1-0 with a 7.20 ERA in three starts this postseason. He is 0-6 with a 6.07 ERA in eight World Series appearances. The right-handed ace allowed six hits and five runs in Game 1.

"I don't think we need rest right now," Baker said. "We've had plenty of rest. It's just a temporary postponement. We will just take it as that and come out ready to play." 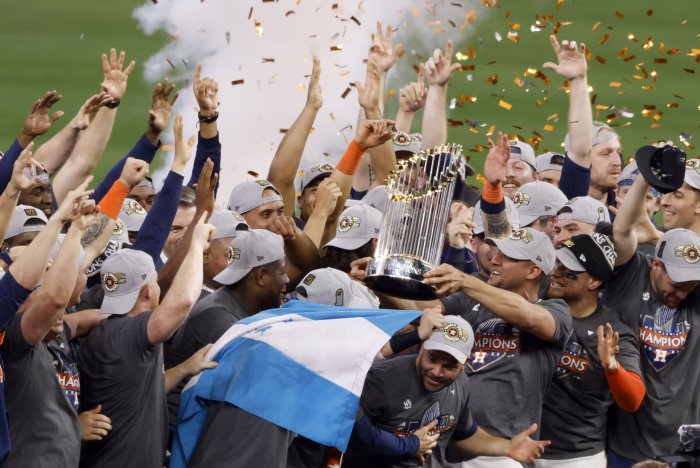 The Houston Astros celebrate with the Commissioner's Trophy after defeating the Philadelphia Phillies 4-1 during Game 6 of the World Series at Minute Maid Park in Houston on November 5, 2022. Photo by John Angelillo/UPI. | License Photo