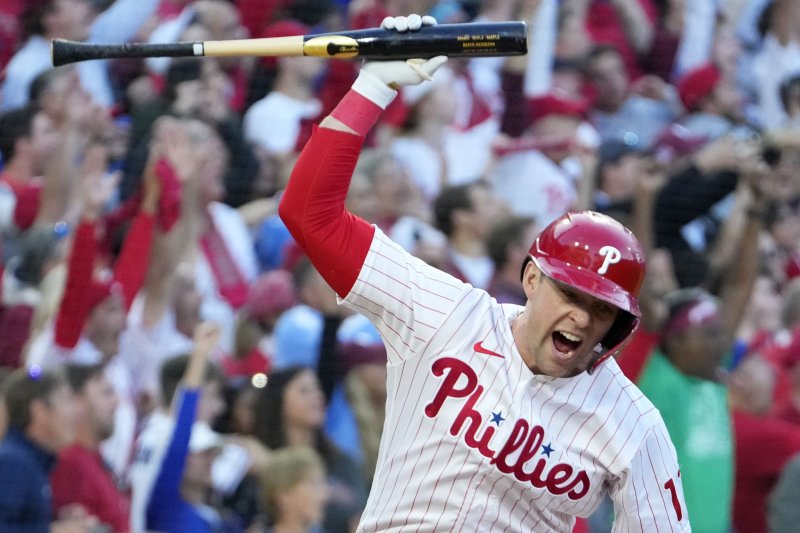 First baseman Rhys Hoskins and the Philadelphia Phillies are the first No. 6 seed in MLB history to advance to the World Series. File Photo by Ray Stubblebine/UPI | License Photo

Oct. 28 (UPI) -- A historic underdog and a top-seeded, perennial contender will face off when the No. 6-seeded Philadelphia Phillies meet the Houston Astros in the 2022 World Series, which will start Friday and could run through Nov. 5.

The Astros, who are undefeated (7-0) this postseason, will host the Phillies in Game 1 at Minute Maid Park in Houston. Each game in the best-of-seven series is scheduled to start at 8:03 p.m. Eastern time and air on Fox.

"We always believed. There was no emotion that it wasn't going to happen," Phillies designated hitter Bryce Harper told Fox Sunday in an on-field interview after Game 5 of the NLCS.

The Astros are heavy favorites to win the Commissioner's Trophy. They will make their fourth World Series appearance in six years and attempt to gain their second title.

The Phillies also have two titles, with the last coming in 2008. They are the first team in MLB history to make the World Series as a No. 6 seed.

MLB extended its standard playoff field to 12 teams for the first time this postseason. Ten teams were in the field in 2021, while the COVID-19-impacted 2020 postseason had 16 teams. Previous postseasons involved two, four, eight or 10 teams.

The Phillies went 87-75 and finished in third place in the National League East division standings. They then beat the third-seeded St. Louis Cardinals in the best-of-three game Wild Card series.

The Phillies beat the No. 2 Atlanta Braves, the reigning World Series champions, 3-1 in the best-of-five NLDS. They then beat the No. 5 San Diego Padres in the NLCS, winning that best-of-seven series 4-1.

"This our second year in a row [at the World Series]," Astros manager Dusty Baker said Monday. "It's had to do. It's a long road to get here. There is a lot that happens in the months from spring training. We persevered and we stayed together."

The Astros earned home-field advantage, which means they will host the first two games of the World Series. They also could host Game 6 and Game 7, if the series is extended.

The Astros went an American League-best 106-56 this season. They also went 59-26 this year in Houston, including the postseason, tying the New York Yankees for the most home victories.

The Phillies went 52-34 in their 86 games in Philadelphia.

Aaron Nola is expected to start Game 1 for the Phillies. He is 2-1 with a 3.12 ERA and 18 strikeouts this postseason.

Fellow right-handed pitcher Justin Verlander is expected to start for the Astros. The two-time Cy Young Award winner is 1-0 with a 6.30 ERA and 14 strikeouts this postseason.

Phillies ace Zack Wheeler, who pitched Sunday in Game 5 of the NLCS, could pitch in Game 2. The right-handed pitcher is 1-1 with a 1.78 ERA and 25 strikeouts this postseason.

Left-handed pitcher Framber Valdez could start Game 2 for the Astros. He is 1-0 with a 1.42 ERA and 15 strikeouts this postseason.

The Phillies lead the National League with a .237 batting average so far in the playoffs. The Astros hit .227 through their seven playoff games, third-best in the league. The Phillies also hit a league-high 16 homers and 23 doubles and drove in 57 runs this postseason.

Astros pitchers logged a 1.88 ERA this postseason, the second-best mark of the 12-team playoff field. The Astros bullpen logged a league-best 0.82 ERA and allowed just three runs in 33 innings. The Phillies bullpen logged a 3.19 ERA with 15 runs allowed in 42.1 playoff innings.

Astros and Phillies starters ranked third and fourth in MLB with respective 2.77 and 2.96 ERAs.

Harper, the reigning National League MVP, hit .419 through 11 playoff games, the second-best average this postseason. His 18 hits were the most in baseball. He also tied teammate Rhys Hoskins with an MLB-best five home runs and 11 RBIs.

Harper is the only Phillies batter who logged an average better than .257.