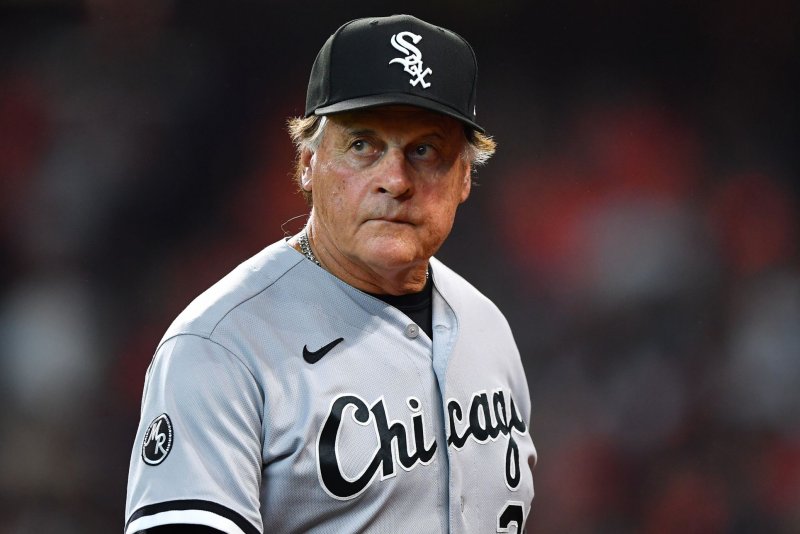 Chicago White Sox manager Tony La Russa said he was told not to return to his role, without the help of medical assistance. File Photo by Maria Lysaker/UPI | License Photo

Oct. 4 (UPI) -- Tony La Russa stepped down as manager of the Chicago White Sox due to health issues, he said in a statement.

La Russa made the announcement Monday afternoon in a news release. The White Sox own a 80-80 record through 160 games this season. La Russa led the White Sox to a 93-69 mark last season, his first after a 10-year hiatus from the managerial ranks.

The Hall of Fame manager, who turned 78 Tuesday, hasn't been in the dugout for the White Sox since Aug. 30.

On Monday, he cited the installation of a pacemaker in February and a problem with his heart that was identified during a periodic check. He said the "solution" was to update the pacemaker earlier this season and for him not to return as manager, without medical assistance.

"During an annual private exam after the first of the year, a second health issue also was diagnosed," La Russa said. "I decided to delay confronting it until the off-season. While I was inactive with the pacemaker, the second issue was analyzed. The result is that a corrective plan has been developed by my medical team and implementation has begun. I informed the White Sox of this second issue while I was out of uniform dealing with the pacemaker.

"As I have stated previously, I continue to request privacy related to my health issues and appreciate those who have respected that request. My overall prognosis is good, and I want to thank everyone who has reached out to me with well wishes related to my health."

La Russa remains under contract through next season, but said it is "obvious that the length of the treatment and recovery process" for his second health issue "makes it impossible" for him to be White Sox manager in 2023. He said the timing of his resignation allows the front office to fill the manager position during the off-season.

He also called the White Sox's record an "unacceptable disappointment."

"There were some pluses, but too many minuses," La Russa said. "In the major leagues, you either do or you don't.

"Explanations come across as excuses. Respect and trust demand accountability, and during my managerial career, I understood that the ultimate responsibility for each minus belongs to the manager. I was hired to provide positive, difference-making leadership and support. Our record is proof. I did not do my job."

La Russa owns a 2,901-2,514 record over 35 seasons as a manager. He led the Oakland Athletics for 10 seasons and the St. Louis Cardinals for 16 seasons. He led the White Sox for 10 total seasons, a tenure including the 1979 through 1986 campaigns and the last two seasons.

The White Sox will host the Minnesota Twins (77-83) at 8:10 p.m. EDT Tuesday at Guaranteed Rate Field in Chicago. They will finish the season Wednesday in Chicago.