Pujols, 42, belted career homer No. 699 against left-hander Andrew Heaney in the third inning at Dodger Stadium before hitting his historic No. 700 off right-hander Phil Bickford in the next frame.

With the second blast, he joined Barry Bonds (762 home runs), Hank Aaron (755) and Babe Ruth (714) as the only sluggers in major league history to hit at least 700 career homers.

Pujols and Aaron are the only members of the elite club who have also collected 3,000 hits.

Playing in what is likely the final season in his stellar 22-year career, Pujols said after the game it was especially meaningful for him to hit the historic homer in Los Angeles, where he played 11 years, mostly as a member of the Los Angeles Angels, and which is now his home.

"What a special night," he told reporters. "To have my family in town and to do it at Dodger Stadium. I said it earlier, my joy, pretty much, of this game came back last year [while playing for the Dodgers] and being in the postseason.

"It's pretty special with the Dodgers fans here, and I get both sides of this. [The Dodgers] get to enjoy this and I get to do it with a Cardinals uniform, which makes it even more special. I'm just thanking God."

Pujols now has amassed 466 homers as a Cardinal, 222 with the Angels and 12 for the Dodgers. He is an 11-time All-Star, three-time MVP and two-time World Series champion.

He will likely have another chance to shine in the postseason starting next month. With the win over the Dodgers, the Cardinals' "magic number" for clinching a playoff spot fell to four with 10 games remaining in the regular season. 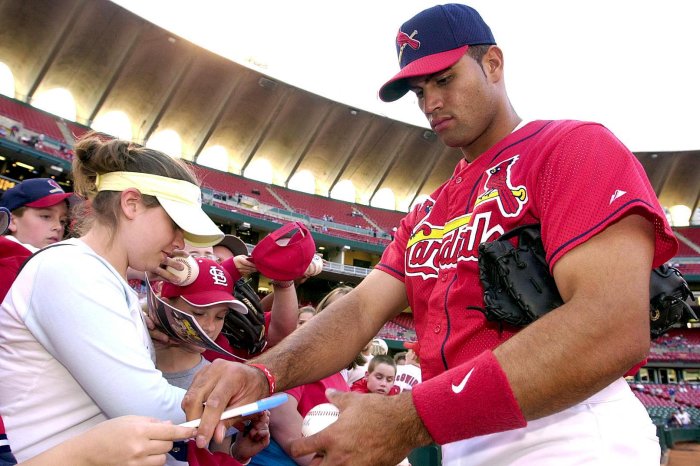 St. Louis Cardinals standout rookie Albert Pujols (5) signs autographs before a game with the Montreal Expos at Busch Stadium in St. Louis on April 25, 2001. Pujols has become the team leader and a fan favorite, hitting a .377 batting average, with six home runs and 19 runs batted in his rookie season. Photo by Bill Greenblatt/UPI | License Photo