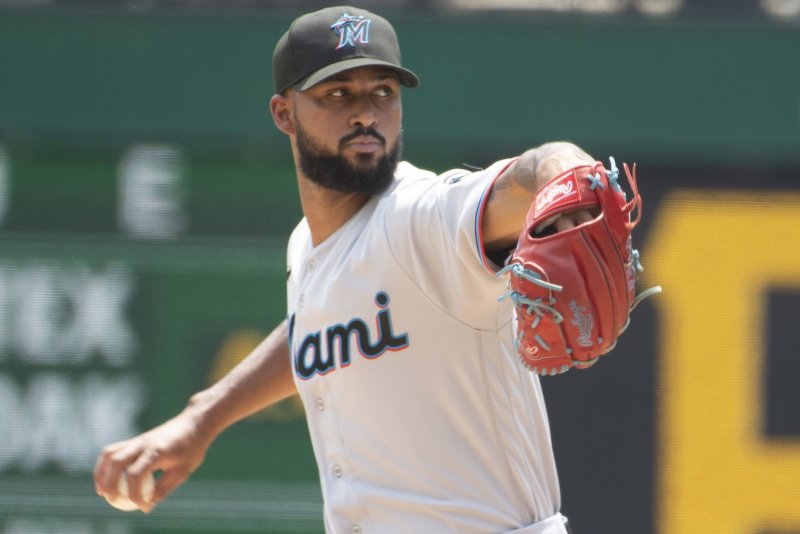 MIAMI, Aug. 4 (UPI) -- Miami Marlins ace Sandy Alcantara lowered his MLB-best ERA to a paltry 1.88, while teammate Jesus Aguilar clobbered a slider for a 403-foot homer to pace a 3-0 shutout win over the Cincinnati Reds in Miami.

"The made some great contact, but we won and I feel so happy," Alcantara told Bally Sports Florida in an on-field interview.

"In the first inning, I felt like I was a little quick. [Shortstop] Miguel Rojas told me I needed to relax and I did it. You guys can see the result."

The strong National League Cy Young Award contender struggled early on, but then settled down the stretch. He allowed the Reds to load the bases and needed 22 pitches to escape the first inning, but retired 17 of the next 18 hitters.

He allowed two hits in the seventh, but then retired the final seven Reds hitters to complete the shutout.

"I think the first inning was huge for [Alcantara]," Marlins manager Don Mattingly told reporters. "To get out of that was big. I felt like at that point, he was going to settle and they were in for a full dose of Sandy."

Neither team scored through the first three innings. Marlins All-Star first baseman Garrett Cooper lined out to lead off the bottom of the fourth. Aguilar then stepped into the batter's box to face Reds starter Mike Minor.

The left-handed pitcher threw a fastball for a called strike to start the exchange. He then missed the zone with another fastball to even the count.

Aguilar hit his final toss of the exchange, an 87.2-mph slider, high and deep to left field. The 402-foot blast, which traveled 106 mph off his bat, landed in the second deck.

Cooper added to the lead with a two-run double in the bottom of the fifth. Neither team scored over the final three innings.

Marlins second baseman Luke Williams went 3 for 3 with a run scored in the win. Aguilar went 1 for 4 with an RBI, a run scored and a walk.

Marlins left fielder J.J. Bleday went 2 for 4 in the win.

Veteran designated hitter Joey Votto was the only Reds player to reach base twice. He went 2 for 4 with two singles. The Reds left 10 men on base in the loss.

MLB // 5 days ago
MLB mulls potential time changes for Mets-Braves series due to hurricane
Sept. 28 (UPI) -- MLB representatives are holding talks with the Atlanta Braves and New York Mets about potential changes to their scheduled series this weekend in Atlanta because of Hurricane Ian' path, the league confirmed Wednesday.

MLB // 6 days ago
Marlins pitcher becomes first in 100-plus years to balk three times in same at-bat
Sept. 28 (UPI) -- Veteran pitcher Richard Bleier made history -- in an unfortunate manner -- in a Miami Marlins win over the New York Mets, becoming the only MLB player in more than 100 years to be called for three balks during one at-bat