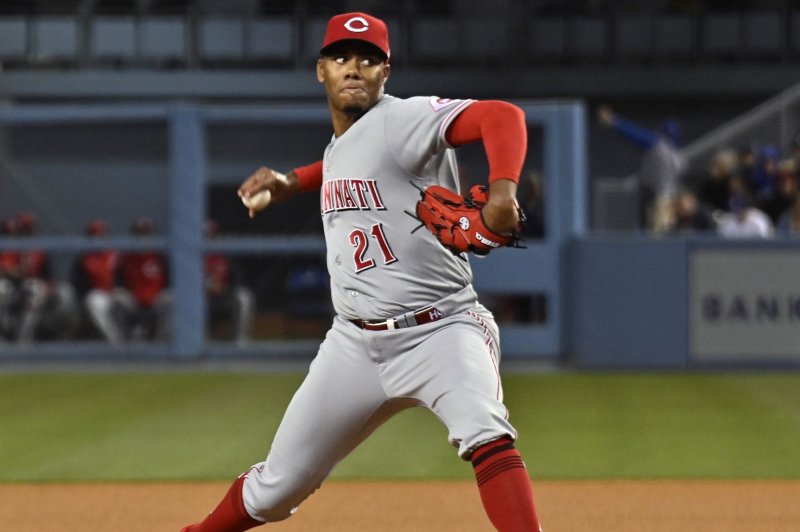 May 16 (UPI) -- Rookie Hunter Greene and fellow Cincinnati Reds pitcher Art Warren combined for an eight-inning no-hitter, which resulted in a rare loss to the Pittsburgh Pirates in the finale of a four-game series.

Greene issued five walks, nine strikeouts and allowed one run over 7 1/3 innings in the 1-0 setback Sunday at PNC Park in Pittsburgh. Warren issued one walk in a hit-free eighth inning appearance.

"It is what it is," Greene told reporters. "I think you've got to embrace all the thoughts and emotions in that moment and just go out there and have fun.

The Pirates are the sixth team in MLB history to win a game without the help of a hit. The Los Angeles Dodgers were the last team to accomplish the odd feat, when they beat the Los Angeles Angeles 1-0 on June 28, 2008, in Los Angeles. Angels pitchers Jered Weaver and Jose Arredondo combined two issue three walks and nine strikeouts over eight no-hitting innings in that setback.

Greene struck out left-fielder Ben Gamel and third baseman Ke'Bryan Hayes to start Sunday's game. He then walked center-fielder Bryan Reynolds, but got out of the inning on a fly out from Pirates designated hitter Daniel Vogelbach.

The Vogelbach retirement started a string of nine consecutive outs for the right-handed pitcher. Greene later walked Vogelbach in the fourth and retired 10 of the next 11 hitters.

But the 100-mph heater-throwing rookie got into trouble in the eighth. Greene forced a ground out from Pirates right-fielder Jack Suwinski to start the frame, but walked shortstop Rodolfo Castro and catcher Michal Perez in the next two at-bats.

Warren entered the inning for the next exchange and issued a four-pitch walk to Gamel to load the bases.

Hayes followed with a chopper off the grass. The ball bounced between second and first base and was fielded by second baseman Alejo Lopez. Lopez flipped to shortstop Matt Reynolds for a force out at second. Reynolds then fired a throw to first base, but it wasn't in time to catch Hayes for the final out of the inning.

Castro ran in from third base on the play for the game's lone run. Warren forced a Reynolds pop out on the next play to send the game to the ninth.

The Reds totaled just four hits and left nine runners on base in the loss. Moustakas and Perez were the only players who reached base twice. Moustakas went 1 for 3 with a walk. Perez was 0 for 1 with two walks for the Pirates.

MLB // 2 days ago
MLB suspends 12, including interpreter, for Mariners-Angels brawl
June 28 (UPI) -- Major League Baseball issued a dozen suspensions, including an interpreter, for their roles in a brawl between the Los Angeles Angels and Seattle Mariners.

MLB // 3 days ago
Eight ejected in Mariners-Angels benches-clearing brawl
June 27 (UPI) -- Six players and two managers were ejected for their roles in a large brawl between the Seattle Mariners and Los Angeles Angels in the second inning of their series finale at Angel Stadium.