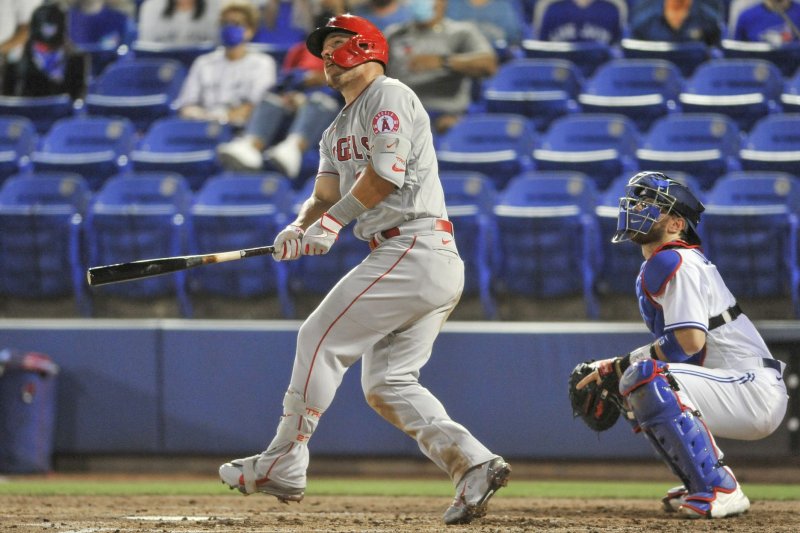 April 15 (UPI) -- Three-time MVP Mike Trout set a new mark for MLB's longest home run of 2022 with a 472-foot blast in a Los Angeles Angels loss to the Texas Rangers.

The star outfielder hit the solo shot in the top of the first inning of the 10-5 setback Thursday at Globe Life Field in Arlington, Texas. Trout, who missed most of last season due to injury, homered twice in his last four games.

"I just hope I hit my driver like that, I told him afterward," Angels manager Joe Maddon told reporters, when asked about the Trout home run.

"I mean, seriously, if that was a golf ball, I'd be really happy. That went out quickly and loudly. It was so hot off the bat, absolutely."

Angels pitcher Shohei Ohtani struck out in the first at-bat of the game. Trout then settled in against Rangers starter Dane Dunning. Trout fouled off the first offering of the exchange. He then earned a 3-1 lead in the count. The right-handed Dunning tossed in a slider for his final offering.

Trout dropped his bat barrel through the strike zone and made contact with the low-and-outside offering. He sent the ball off the tall wall in dead center field.

The blast traveled 113 mph off Trout's bat and left the field in 5.2 seconds, according to Statcast.

Angels left fielder Brandon Marsh doubled the lead with an RBI single three at-bats later. The Rangers responded when catcher Jonah Heim smacked a 391-foot grand slam off Ohtani in the bottom of the second.

Trout went 1 for 4 with an RBI, a run scored and a walk in the loss. He is hitting .211 this season. Marsh and Stassi each went 2 for 5 with two RBIs and a run scored.

Heim went 3 for 4 with five RBIs and three runs scored for the Rangers.

MLB // 8 hours ago
Longtime Red Sox broadcaster Dennis Eckersley to leave booth
Aug. 8 (UPI) -- Baseball great Dennis Eckersley, who spent a combined five decades as an MLB pitcher and broadcaster, will end his tenure as a color commentator for the Boston Red Sox at the end of the 2022 season, he announced Monday.

MLB // 4 days ago
Traded Brandon Drury hits grand slam in first pitch with Padres
Aug. 4 (UPI) -- Brandon Drury needed one pitch to make a huge impact in front of his new San Diego Padres teammates. The designated hitter, who was traded this week, smacked the offering to left field for his second career grand slam.

MLB // 5 days ago
Vin Scully, legendary Dodgers broadcaster, dies at 94
Aug. 3 (UPI) -- Iconic broadcaster Vin Scully, who serenaded baseball fans with his voice for nearly seven decades as the radio soundtrack for Los Dodgers Dodgers games, has died, the team said. He was 94.

MLB // 6 days ago
Reds' Joey Votto: Social media 'leap' was response to feeling isolated
MIAMI, Aug. 1 (UPI) -- Cincinnati Reds star Joey Votto says a feeling of being "isolated" and desire to correct fans' false belief that he had a serious, boring personality led to the surge in his using TikTok and other social media platforms.
Advertisement