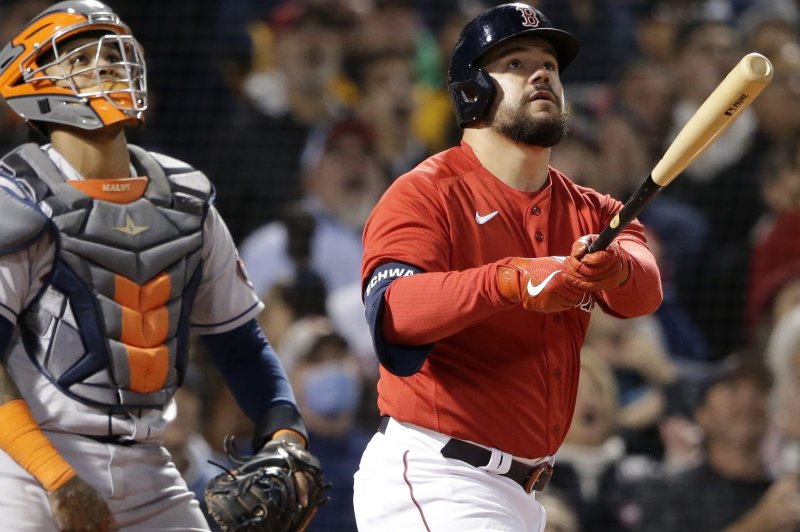 Oct. 19 (UPI) -- Kyle Schwarber's 430-foot grand slam was one of four Boston Red Sox homers in a blowout of the Houston Astros in Game 3 of the ALCS. The 12-3 triumph gives Boston a 2-1 lead in the best-of-seven series.

Christian Arroyo, Rafael Devers and J.D. Martinez also went deep in the victory Monday in Boston. Game 4 of the ALCS is Tuesday at Fenway Park.

"This is what we live for," Schwarber told reporters. "We live to be in the postseason. When you get that first taste, that first experience, you want to keep coming. You want more."

Rodriguez and Urquidy retired the game's first six hitters in order. Urquidy ran into trouble in the second inning. He struck out shortstop Xander Bogaerts to lead off the half inning, but walked outfielder Alex Verdugo in the next exchange. Martinez doubled to center field in the third at-bat of the half inning.

Urquidy then walked right fielder Hunter Renfroe to load the bases. Red Sox catcher Christian Vazquez followed with a single, which scored Verdugo. Arroyo then reached base on a fielder's choice, which scored Martinez for a 2-0 lead.

Schwarber stepped in for the seventh at-bat of the half inning. Urquidy missed the strike zone with each of his first three offerings to the Red Sox first baseman.

Schwarber then smashed a Urquidy 3-0 fastball into the stands in right field. His third homer this postseason traveled 114 mph off his bat, according to Statcast. The grand slam gave the Red Sox a 6-0 lead.

Vazquez drove in Renfroe with an RBI single in the bottom of the third. Arroyo hit relief pitcher Yimi Garcia's next pitch to left field for a 399-foot, two-run homer.

Right fielder Kyle Tucker finally put the Astros on the scoreboard with a 413-foot, three-run homer to right field off Rodriguez in the top of the fourth. That blast made the score 9-3.

Red Sox relief pitchers Hansel Robles, Martin Perez and Hirokazu Sawamura did not allow a hit and a run over the final three innings.

MLB // 10 hours ago
MLB reprimands teams for 'unacceptable' accommodations for women employees
MIAMI, May 27 (UPI) -- Several MLB teams "fall embarrassingly below" standards, create an "untenable working environment for women" and deprive women of "equal access to participate" in the game, MLB said in a memo obtained Friday by UPI.

MLB // 14 hours ago
Yankees, Rays use social media to share U.S. gun violence stats during game
May 27 (UPI) -- The New York Yankees and the Tampa Bay Rays collaborated during their game Thursday night to use their social media accounts to raise awareness about gun violence in the United States.

MLB // 3 days ago
Reds fan accidentally catches baseball in beer cup, chugs for crowd
May 24 (UPI) -- A Cincinnati Reds fan attempted to catch a foul ball during the team's loss to the Chicago Cubs, but his beer did most of the work, as the souvenir landed in the cup placed directly in front of him.