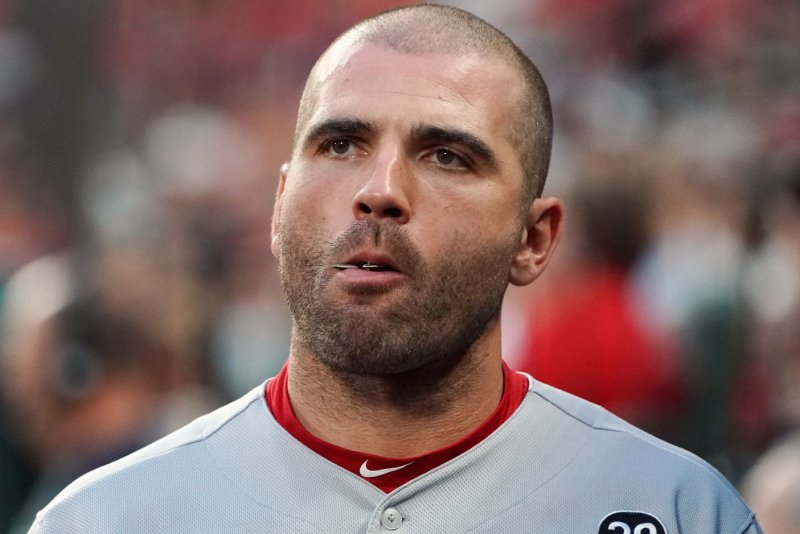 Sept. 28 (UPI) -- Joey Votto inched closer to his career high for home runs in a season with two blasts in a Cincinnati Reds blowout of the Pittsburgh Pirates.

The Reds first baseman went 2 for 4 with four RBIs and two runs scored in the 13-1 victory Monday at Great American Ball Park in Cincinnati.

The victory pushed the Reds winning streak to four games. They still trail the St. Louis Cardinals by 5.5 games for the second spot in the National League Wild Card standings.

"We haven't been eliminated yet, so we're still thinking about pulling off a miracle," Votto told reporters.

All-Star outfielder Nick Castellanos gave the Reds a 1-0 lead with an RBI sacrifice fly in the bottom of the first. Votto stepped up to the plate for the next at-bat.

The veteran first baseman fouled off a fastball on the first offering of his exchange with Pirates starter Connor Overton. He went on to smash a 3-1 Overton fastball into the seats in left field for an opposite-field, two-run homer.

The 366-foot homer traveled 103.3 mph off Votto's bat, according to Statcast.

Reds catcher Tucker Barnhart plated third baseman Eugenio Suarez with an RBI single later in the inning. the Reds took a 4-0 lead into the bottom of the fourth.

Castellanos increased the lead to five runs with another RBI sacrifice fly in the bottom of the fourth. Votto settled in for the next at-bat against Pirates relief pitcher Cody Ponce.

The left hander started that exchange with a curveball outside the strike zone. He then worked the count full. Votto smacked Ponce's eighth pitch of the exchange to right field for a 466-foot, two-run bomb.

The Pirates scored their lone run off a wild pitch in the top of the fifth. Castellanos hit his 33rd homer of the season in the bottom of the sixth. That 407-foot, three-run shot came off Pirates relief pitcher Kyle Keller.

Reds second baseman Jonathan India hit a 440-foot, two-run homer off Pirates reliever Shelby Miller in the bottom of the seventh for the final runs of the night.

India went 4 for 5 with four runs scored and two RBIs. Castellanos went 1 for 2 with five RBIs and a run scored. Suarez went 3 for 4 with two runs scored, an RBI and a walk.

Reds starter Reiver Sanmartin allowed five hits and one run in 5 2/3 innings to earn his first win this season. Overton allowed six hits and four runs in one inning to drop to 0-1.

MLB // 1 day ago
Rosario homers twice, leads Braves to 3-1 NLCS lead over Dodgers
Oct. 21 (UPI) -- Left fielder Eddie Rosario collected four hits, including two homers, to lead the Atlanta Braves to a Game 4 win and a 3-1 NLCS lead over the Los Angeles Dodgers. The Braves are one win from a World Series berth.

MLB // 2 days ago
Cody Bellinger, Dodgers rally for 6-5 win over Braves in Game 3 of NLCS
Oct. 19 (UPI) -- Behind stars Cody Bellinger and Mookie Betts, the Los Angeles Dodgers stormed back to beat the Atlanta Braves 6-5 in Tuesday's Game 3 of the National League Championship Series at Dodger Stadium.

MLB // 3 days ago
MLB playoffs: Schwarber slams Red Sox past Astros, to 2-1 ALCS lead
Oct. 19 (UPI) -- Kyle Schwarber's 430-foot grand slam was one of four Boston Red Sox homers in a blowout of the Houston Astros in Game 3 of the ALCS. The 12-3 triumph gave Boston a 2-1 lead in the best-of-seven series.

MLB // 4 days ago
Rosario, Braves walk-off vs. Dodgers to take 2-0 lead in NLCS
Oct. 18 (UPI) -- Atlanta outfielder Eddie Rosario hit a single off the glove of shortstop Corey Seager to give the Braves a dramatic walk-off win over the Los Angeles Dodgers in Game 2 of the NLCS Sunday on night.
Advertisement