Sept. 13 (UPI) -- All-Star shortstop Francisco Lindor hit three homers, including a game winner, to lead the New York Mets to a narrow win over the rival New York Yankees in a series finale in Queens.

"It was a cool moment for my career, especially in the Subway Series," Lindor told reporters after the 7-6 victory Sunday at Citi Field. "I'm glad we came out on top."

Lindor went 3 for 4 with five RBIs, three runs scored and a walk. The win helped the Mets claim the three-game series against their crosstown foes.

Mets starter Carlos Carrasco got off to a shaky start. He walked Yankees second baseman D.J. LeMahieu and first baseman Anthony Rizzo in the first two at-bats of the game.

Carrasco struck out outfielder Aaron Judge in his third exchange, but allowed an RBI double to outfielder Giancarlo Stanton to give the Yankees a 1-0 edge.

Yankees slugger Joey Gallo scored Rizzo on a sacrifice fly to push the lead to 2-0 in the top of the first. Mets right-fielder Michael Conforto cut into the deficit with an RBI single in the bottom of the inning.

Mets center-fielder Kevin Pillar reached base on a fielder error to lead off the bottom of the second. Yankees starter Clarke Schmidt walked Mets catcher James McCann in the next exchange. Lindor stepped up to the plate three at-bats later, with Pillar and McCann still on base.

The veteran shortstop took a change-up for a ball on the first pitch of his exchange with Schmidt. The Yankees right-handed pitcher later tossed in an 1-1 knuckle curve.

Lindor swatted the off-speed offering to right field for a 398-foot, three-run homer.

McCann pushed the Mets lead to 5-2 with an RBI sacrifice fly in the bottom of the fifth. Yankees shortstop Gleyber Torres responded with a 382-foot, two-run shot off Mets relief pitcher Jeurys Familia in the top of the sixth.

Lindor stepped into the box for his second homer of the night in the bottom of the same inning. He sent that longball to center field for a 436-foot solo shot off Yankees relief pitcher Wandy Peralta.

Stanton tied the score at 6-6 with a 443-foot, two-run homer off Mets reliever Brad Hand in the top of the seventh. Lindor answered with his game winner in the bottom of the next inning.

Mets third baseman Jonathan Villar popped out in the first at-bat of the frame. Lindor settled in against Yankees reliever Chad Green in the next exchange.

"Every night when we've been down by one in the ninth, and I'm supposed to tie it or win the game for the team," Lindor said. "We all want that moment, because we do it for the fans and we do it for the organization."

Mets closer Edwin Diaz allowed a single and a walk in the top of the ninth, but recorded three outs to earn his 29th save of the season.

"I thought we competed really, really well," Yankees manager Aaron Boone told reporters. "It was a back-and-forth game and a great player finished off a great night. That ultimately was the difference.

"These games are huge. It stings when you lose them and it's pretty joyful when you win."

Carrasco allowed three hits and two runs in five innings, but was not on the record for a decision. Schmidt allowed seven hits and five runs in 4 1/3 innings for the Yankees.

Mets left-fielder Jeff McNeil and second baseman Javier Baez recorded two hits apiece in the victory. LeMahieu went 3 for 4 with two runs scored and a walk for the Yankees. Stanton went 2 for 5 with three RBIs and a run in the loss.

MLB // 10 hours ago
Braves' Charlie Morton fractures fibula in Game 1, out for rest of World Series
Oct. 26 (UPI) -- Atlanta Braves starting pitcher Charlie Morton will be out for the remainder of the World Series after suffering a fractured right fibula early in Game 1 on Tuesday night at Minute Maid Park in Houston. 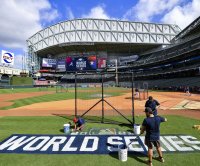 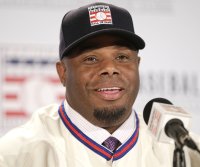