Anderson had been in and out of the lineup over the last 10 days because of sore legs. The White Sox were hopeful he could play Tuesday against the Pittsburgh Pirates after the club had a day off Monday, but Anderson missed that game and will take more time to rest.

Anderson's placement on the IL is retroactive to Aug. 29.

The move comes a day after starting pitcher Lance Lynn went on the injured list with knee inflammation and Lucas Giolito departed his start with hamstring tightness.

To fill out the roster, the White Sox reinstated veteran outfielder Billy Hamilton after the completion of his rehab assignment with Triple-A Charlotte. The 30-year-old speedster returns from an oblique strain that forced him to spend August on the IL. 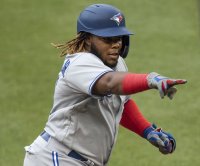