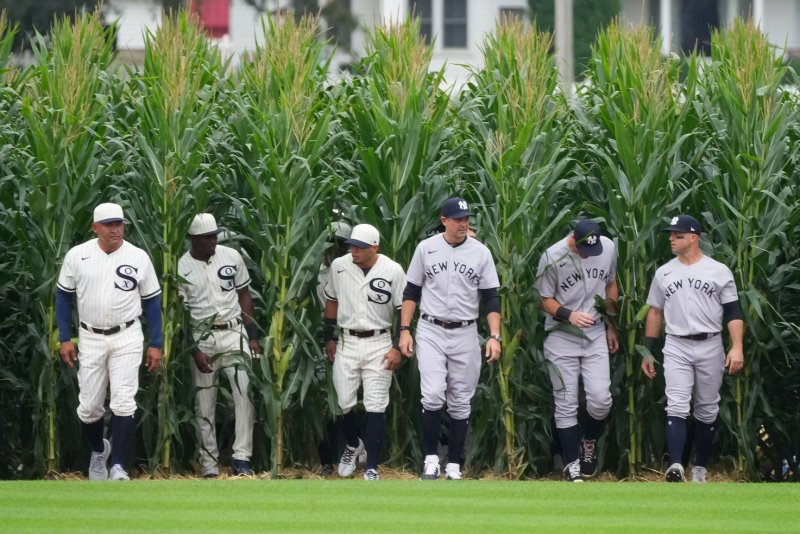 Chicago White Sox and New York Yankees players emerge from a cornfield depicted in the Field of Dreams film before participating in the MLB Field of Dreams Game on Thursday in Dyersville, Iowa. Photo by Pat Benic/UPI | License Photo

Aug. 13 (UPI) -- MLB's "Field of Dreams" Game will return in 2022, with the potential for games beyond that on the Dyersville, Iowa, farm, MLB Commissioner Rob Manfred announced.

Manfred spoke about future games on the site of the 1989 Field of Dreams movie Thursday before the Chicago White Sox beat the New York Yankees 9-8 in the inaugural affair.

"The reception that this event has received has been so positive that we will be back," Manfred told reporters. "It's pretty clear we're going to be back next year, and we'll have to talk about it after that.

"But it's just been so successful that it's hard not to take the opportunity to do it again."

Field of Dreams actors Kevin Costner and Dwier Brown were among the 7,832 fans in attendance. On Wednesday, ticket prices on the secondary market ranged from $999 to more than $4,000.

A lottery was held for face-value tickets from July 16 to 23, but only Iowa residents were eligible.

Costner kicked off Thursday's game with a re-enactment of one of the most famous Field of Dreams scenes. He held a baseball as he emerged from the cornfield beyond the outfield wall.

He then turned back toward the cornfield as Yankees and White Sox players also emerged from the endless rows of stalks.

Manfred was asked if the Chicago Cubs would be one of the teams featured in the 2022 edition of the game, but declined to say which teams will be invited to Dyersville next.

"I'm going to tell you that we are coming back next year, we are looking at August, and we're not in a position to name teams yet," Manfred said.

MLB // 2 days ago
Gleyber Torres homers twice in same inning, Yankees pummel Pirates
Sept. 22 (UPI) -- All eyes might be on Aaron Judge's historic journey through the home run record book, but teammate Gleyber Torres recently got in on the longball trend, with two bombs in the same inning of a New York Yankees victory.

MLB // 1 week ago
John Stearns, ex-Mets All-Star and coach, dies at 71
Sept. 16 (UPI) -- Longtime New York Mets catcher and coach John Stearns, who earned four All-Star selections while with the team from 1975 to 1984, died after a long battle with cancer, the team announced Friday. He was 71.

MLB // 1 week ago
Angels' Mike Trout homers in 7th straight game, nears MLB record
Sept. 13 (UPI) -- The Los Angeles Angels might have lost another game, but slugger Mike Trout continued what could be a record home run tear with his seventh long ball in as many games in a setback to the Cleveland Guardians.