The Pirates received infielder/outfielder Tucupita Marcano, right-hander Michell Miliano and outfielder Jack Suwinski in exchange for Frazier. According to the teams, Pittsburgh also sent $1.4 million to the Padres in the deal.

"Good job by our scouting department, our development department and obviously Adam to turn himself into a really good Major League player," Pirates general manager Ben Cherington told reporters. "He did a really good job for the Pirates. We wish him the very best in San Diego."

For everything on and off the field, thank you @A_Fraz12. pic.twitter.com/jkVMx6mj2H— Pittsburgh Pirates (@Pirates) July 26, 2021

Entering Monday, Frazier ranked first in MLB with 125 hits. He also had a .324 batting average with four home runs and 32 RBIs over 98 games this season for the Pirates.

The 29-year-old Frazier, who isn't a free agent until after the 2022 season, earned All-Star honors for the first time in his six-year career this summer. The 2020 Gold Glove finalist was the Pirates' second-longest-tenured player -- behind right fielder Gregory Polanco -- before the trade.

Marcano, 21, has a .272 batting average with six home runs and 26 RBIs for Triple-A El Paso. He has played shortstop, second base and in the outfield this season.

The 22-year-old Suwinski has bashed 15 home runs for Double-A San Antonio this season. 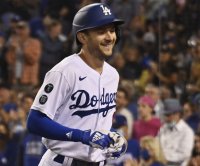