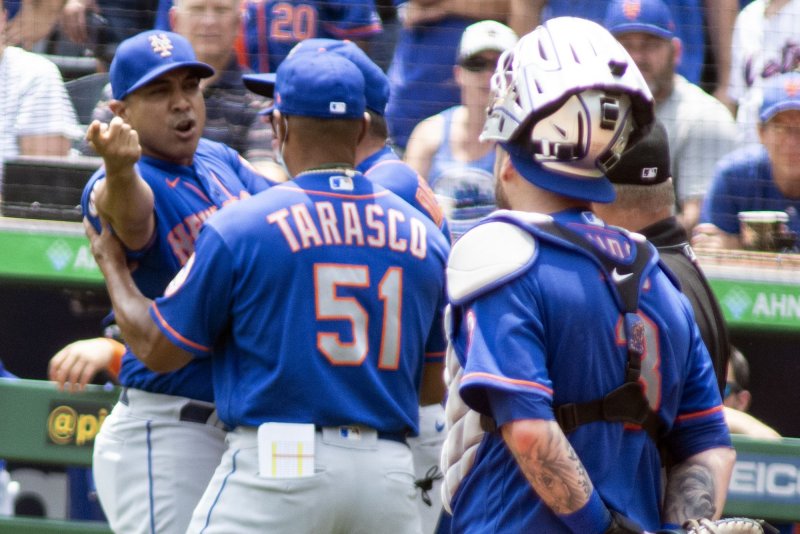 Rojas began serving his two-game suspension Monday night against the Cincinnati Reds. He said he wasn't given a chance to appeal the ban.

Mets bench coach Dave Jauss will take over managerial duties Monday and Tuesday against the Reds.

"I'm a little upset that I'm going to be missing the next two games," Rojas told reporters before batting practice Monday. "I missed the team for 8 2/3 [innings Sunday], not getting to watch from the dugout. But the league's got to do what they got to do. We know how sometimes things get heated up.

Rojas argued with umpires after Pirates shortstop Kevin Newman's dribbler down the third-base line was ruled a fair ball, allowing three runs to score. The Mets skipper immediately ran out of the dugout to protest the call and was ejected in the first inning.

"I got hot because it was a bad call," Rojas said. "He made an embarrassing play. That's what led me to escalate the way I did. It's the heat of the moment, the play. Getting close and arguing.

"I wanted it to be checked with the other umpires and I was denied. I still firmly believe it was foul. I would love for a play like that to be reviewable."

Rojas has now been ejected three times this season. The Mets went on to beat the Pirates 7-6 on Sunday.

MLB // 5 days ago
Dodgers' Will Smith comes off bench, slugs walk-off homer to beat Giants
July 21 (UPI) -- Catcher Will Smith came off the bench and smacked a 419-foot, three-run homer to give the Los Angeles Dodgers a walk-off win against the rival San Francisco Giants Tuesday night.

MLB // 5 days ago
Cubs score six in ninth, rally vs. Cardinals
July 21 (UPI) -- The Chicago Cubs scored six runs in the ninth inning of an epic comeback to beat the St. Louis Cardinals on the second night of a four-game National League Central division series at Busch Stadium.