June 9 (UPI) -- Shohei Ohtani smacked the longest home run of his career for his latest exploit in what continues to be a historic season for the dynamic playmaker.

The Los Angeles Angels pitcher/designated hitter hit the towering blast in an 8-1 win over the Kansas City Royals on Tuesday at Angel Stadium in Anaheim, Calif.

Angels starting pitcher Andrew Heaney retired the Royals in order in the top of the first inning. Angels left fielder Justin Upton took a walk in the first at-bat in the bottom of the inning.

Ohtan stepped up to the plate as the Angels' second hitter of the game. He took a called strike from Heaney on the first pitch. Ohtani worked the count even at 2-2 and fouled off Heaney's fifth pitch.

Ohtani proceeded to smash Heaney's sixth offering of the exchange, an 80.2-mph changeup, to right center field. The blast traveled 111.7-mph off Ohtani's bat and went an estimated 470 feet.

Max Stassi hit another two-run homer for the Angels in the bottom of the third inning. Jose Iglesias and Upton added solo homers in the fourth frame.

Hanser Alberto plated Michael A. Taylor with an RBI double for the Royals' lone run in the seventh inning. Angels right fielder Taylor Ward brought in the final runs of the game with another two-run homer in the bottom of the eighth inning.

The Angels (29-32) host the Royals (29-30) in the final game of the series at 9:38 p.m. EDT Wednesday at Angel Stadium. Ohtani is expected to return to the mound when the Angels face the Arizona Diamondbacks on Friday in Phoenix. 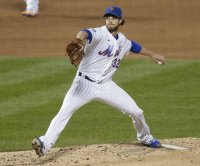 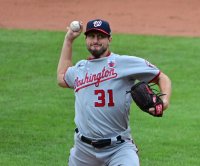 MLB // 4 days ago
Austin Gomber, Rockies hold off Marlins rally in Miami
MIAMI, June 10 (UPI) -- The Colorado Rockies got off to a great start in the second game of their series against the Miami Marlins, but had to lean on their bullpen amid a late rally to secure the victory in Miami.

MLB // 5 days ago
Pirates' Ke'Bryan Hayes skips first base, gets HR overturned
June 9 (UPI) -- Pittsburgh Pirates third baseman Ke'Bryan Hayes produced one of the biggest blunders of the 2021 MLB season, when he skipped first base and his home run was overturned during a loss to the Los Angeles Dodgers.