New York Yankees starter Gerrit Cole set a new MLB record with 61 strikeouts without a walk during a loss to the Texas Rangers on Monday in Arlington, Texas. File Photo by Steven J. Nesius/UPI | License Photo

May 18 (UPI) -- Ace pitcher Gerrit Cole continued his 2021 season by setting another record in the first inning of the New York Yankees' loss to Texas on Monday -- a new mark for strikeouts without allowing a walk.

Cole allowed a Willie Calhoun double in his first exchange of the 5-2 loss at Globe Life Field in Arlington, Texas. He then struck out Nick Solak, Nate Lowe and Joey Gallo in order to end the inning.

"That's pretty cool," Cole told reporters after the game. "I wish it would have come in a win. I'm kind of more focused on the fact that we lost."

Cole threw two more strikeouts, but walked Gallo in the third inning for his first walk since April 12. Cole pushed the new mark to 61 strikeouts and no walks over 41 2/3 innings.

Gio Urshela gave the Yankees a 1-0 lead with an RBI double in the top of the first frame, but the Rangers got to Cole in the bottom of the second inning.

Adolis Garcia hit a leadoff homer off the Yankees ace. Rangers shortstop Isiah Kiner-Falefa followed with an RBI double for a 2-1 lead. Jose Trevino drove in the third run of the inning with an RBI single.

Calhoun hit another solo homer for the Rangers in the bottom of the fifth inning. The Rangers pushed the lead to 5-1 on a throwing error in the sixth inning.

Yankees first baseman Luke Voit drove in the final run of the game with a solo homer in the top of the eighth inning.

Cole allowed seven hits and five runs in five innings and was denied in his quest for an American League-best sixth win. He threw seven strikeouts in the loss.

Rangers starter Jordan Lyles allowed six hits and one run in six innings to improve to 2-3 this season. Calhoun and Garcia each went 2 for 4 with an RBI for the Rangers.

The Rangers next host the Yankees in the second game of the series at 7:05 p.m. CDT Tuesday at Globe Life Field.

MLB // 16 hours ago
Yankees make history with triple play vs. Blue Jays
June 18 (UPI) -- The New York Yankees completed their second triple play of the season in a win over the Toronto Blue Jays. The triple play was the first in MLB history completed in the order of position numbers 1-3-6-2-5-6.

MLB // 16 hours ago
Indians smack four homers in win over Orioles
June 18 (UPI) -- The Cleveland Indians pounced all over the Baltimore Orioles pitching staff in their latest victory, with four players homering to cap off a four-game sweep in Cleveland. 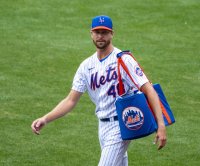