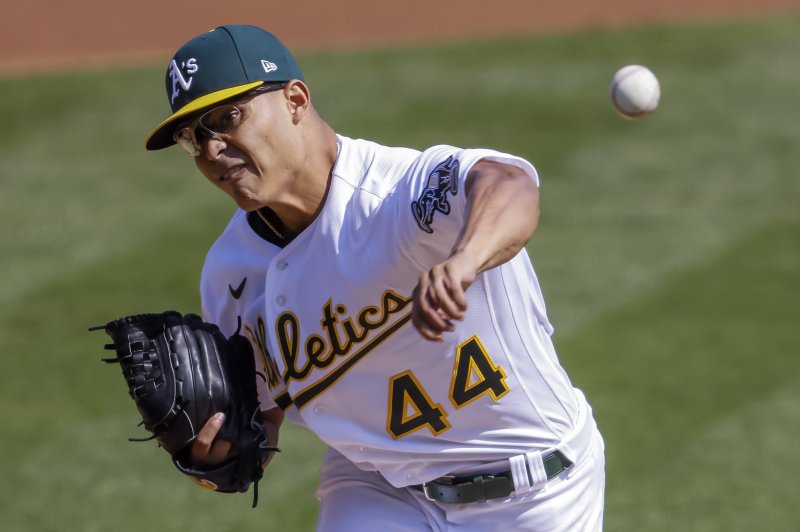 May 2 (UPI) -- Oakland Athletics left-hander Jesus Luzardo will be out indefinitely after breaking the pinkie on his throwing hand while playing a video game before his scheduled start Saturday.

Luzardo underwent an X-ray after the Athletics' 8-4 loss to the Baltimore Orioles. The exam revealed a hairline fracture in his left hand, leading to his placement on the 10-day injured list Sunday.

A's manager Bob Melvin told reporters he didn't know how long Luzardo would be out or whether he would need a cast or splint on the finger.

"Before [Saturday's] game, he was playing a video game and accidentally bumped his hand on the desk as he was playing the game," Melvin said. "He came in, was a little bit sore, training staff checked him out.

"We threw him in the cage before he went out there, watched him warm up. He was comfortable pitching, the training staff was comfortable with him pitching. After the game, we got an X-ray and there was a hairline in the pinkie finger."

Luzardo only lasted three innings and took the loss against the Orioles on Saturday. He allowed six runs -- three earned -- on five hits.

"It just depends on how it heals and how it responds," Melvin said. "As you would expect, it was a little bit worse today, a little bit puffier today, but really have no idea on a timetable yet."

Left-hander Adam Kolarek was called up from the alternate site to take Luzardo's spot on the roster.

Los Angeles Dodgers' Will Smith crushes a three-run home run in the fourth inning for the Dodgers' first hit and taking the lead over the Cincinnati Reds at Dodger Stadium in Los Angeles on Tuesday. The Reds defeated the Dodgers 6-5. Photo by Jim Ruymen/UPI | License Photo

MLB // 2 days ago
MLB suspends 12, including interpreter, for Mariners-Angels brawl
June 28 (UPI) -- Major League Baseball issued a dozen suspensions, including an interpreter, for their roles in a brawl between the Los Angeles Angels and Seattle Mariners.

MLB // 3 days ago
Eight ejected in Mariners-Angels benches-clearing brawl
June 27 (UPI) -- Six players and two managers were ejected for their roles in a large brawl between the Seattle Mariners and Los Angeles Angels in the second inning of their series finale at Angel Stadium.

Swiatek moves on, Pliskova upset in Round 2 as rain suspends Wimbledon