Pitcher Satchel Paige, shown in 1948 while with the Cleveland Indians, will have 20 years of additional data credited to his career statistics after MLB designated the Negro Leagues as major leagues. Photo courtesy of the Negro Leagues Baseball Museum

Negro Leagues star Oscar Charleston (C), shown in 1921 as a member of the St. Louis Giants, never appeared in MLB, but now will have his statistics added to the official major league record book. Photo courtesy of the Negro Leagues Baseball Museum

James "Cool Papa" Bell, shown in 1942 with the Chicago American Giants, will have his statistics added to the baseball record book after MLB designated the seven Negro Leagues as major leagues. Photo courtesy of the Negro Leagues Baseball Museum

MLB announced the decision to include the statistics in December, reclassifying the seven leagues, which played from 1920 to 1948, as major leagues.

MLB and the Elias Sports Bureau have started the verification process for the findings of Gary Ashwill, Larry Lester and other researchers who are trying to piece together records that are largely a mystery.

Many Negro Leagues game accounts have been lost or distorted or never were recorded. But the researchers' statistical discoveries will meld into major league records, even though these players' list of achievements probably never will be complete.

"For White baseball, you had the Sporting News, which covered everything. Even mainstream newspapers had box scores for every game," Ashwill said. "If you had to reconstruct White baseball history, you could do it very easily because you have evidence and material all over the place."

The researchers stare at microfilm for hours in libraries and comb the country for publications, baseball artifacts and unanticipated discoveries. In November, for example, Ashwill found two previously unreported home runs that "Mule" Suttles hit for the St. Louis Stars in 1926.

The researchers have discovered that "Cool Papa" Bell holds the leagues' single-season stolen base record (49 in 1929 for the St. Louis Stars). They've counted 238 home runs for Josh Gibson, a Negro Leagues career record.

"It cost me a dime for every copy from the microfilm machine," Lester said. "I have roughly 14,000 box scores after 50 years of research."

Ashwill and Lester, who also co-founded the Negro Leagues Baseball Museum in Kansas City, Mo., are among a group of some 10 primary researchers with an obsession for uncovering the hidden performances.

Lester has 20 four-drawer file cabinets at home, each packed with newspaper clippings, box scores, biographies and other Negro Leagues data.

The quest has been inspirational, frustrating and emotional for the researchers. Lester has become teary-eyed looking into the microfilm viewer.

"You read about a great ballplayer like a 'Bullet' Rogan and see the games on the screen where he gets two or three hits every game," Lester said. "He's pitching, playing center field, leading his team in home runs and hitting over .400.

"And you are like: Why haven't I heard of this ballplayer? It shakes your faith in baseball Americana."

Some tangible Negro Leagues records from newspapers and other publications weren't considered "valuable" and often were discarded after Jackie Robinson broke MLB's color barrier with the Brooklyn Dodgers in 1947, the researchers said.

The popularity of the leagues faded into oblivion as more Black players joined MLB in the 1950s and 1960s.

Newspapers that served Black communities -- like the Chicago Defender, Pittsburgh Courier, Baltimore Afro-American and Kansas City Call -- are the main source for Negro Leagues statistics, but they only printed weekly until the 1930s and couldn't cram a week's worth of daily box scores into only two or three pages dedicated to sports. As a result, some box scores never were printed, creating a dead end for historians.

The available box scores often aren't of good quality and omit important statistics. Modern-day researchers have had to collect multiple newspapers from around the United State to verify performances.

"I have mined more than 400 newspapers for Negro Leagues data," Lester said.

The statistics detectives work on a game-by-game basis for a specific season with the ultimate goal of compiling a player's career statistics.

"For any one season, you have to use dozens and dozens of newspapers," Ashwill said. "There are plenty of Negro Leagues games that took place in small cities. You have to dig up and check newspapers from all those cities, and it takes forever."

The tedious work has provided enough statistics to form the Seamheads database, but the job may never be finished. Researchers say a "complete" database won't be possible because of the lost and incomplete information.

Lester, 71, had a closer connection to the Negro Leagues than most researchers. He lived in the same Kansas City neighborhood as some players and went to high school with the children of Satchel Paige, arguably the greatest player in league history.

He said he "can't wait" to share his findings with baseball fans.

"You just want to know, why has America kept a great ball player like Oscar Charleston from [us]?" Lester said. "I know about Ty Cobb, Cy Young, Babe Ruth, a lot of White ballplayers I've never seen play. But what about 'Rap' Dixon and 'Turkey' Stearnes?"

MLB's official historian, John Thorn, credited Lester, Ashwill and other researchers for the data expansion. He said Seamheads has extended the data collection beyond what "anyone imagined was possible" over the last decade.

"Everyone who has found an extra home run for 'Mule' Settles [who primarily played for the Newark Eagles] or an extra RBI for 'Chino' Smith [Brooklyn Royal Giants] stands on the shoulders of giants," Thorn said.

New record-holders will be announced as Elias and MLB verify statistics from Negro Leagues players. It's a process with no finish line.

"I don't know if this will take six months or six years," said John Labombarda, the director of research at Elias Sports Bureau.

"How missing information will be filled in is an ongoing process. As they find information, they will let us know and we will include that," he said.

Thorn expects some fans to object to the inclusion of Negro League stars on all-time statistical leaderboards, which likely will move MLB legends like Babe Ruth and Ted Williams down in the rankings.

"The really significant thing for fans to understand is that history is not product, it's process," Thorn said.

"History is not something you put on a bronze plaque and put in Cooperstown [at the Baseball Hall of Fame] and don't challenge that data. History is always subject to investigation, and in some cases, corrections." 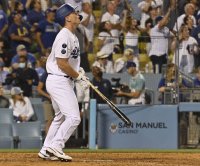