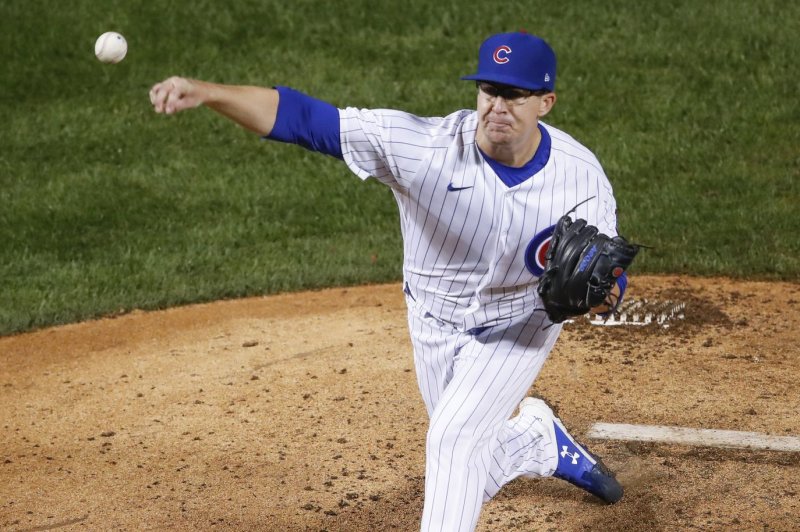 Sept. 14 (UPI) -- Alec Mills used 114 pitches and a deceptive curveball to complete the second no-hitter of the 2020 season and lead the Chicago Cubs to a dominant victory over the Milwaukee Brewers in Milwaukee.

"I didn't even know how to celebrate," Mills told the Marquee Sports Network. "It's just something that all came together. It's obviously a memory I'll have forever."

Lucas Giolito of the Chicago White Sox threw the first no-hitter this season in an Aug. 25 win over the Pittsburgh Pirates.

Mills retired the first five Brewers batters in order to spark his pristine performance Sunday in Milwaukee. He then issued a walk to Ben Gamel before he retired another five consecutive hitters and issued his second walk of the game.

The Cubs right-handed pitcher retired the next nine hitters before he issued his final walk in the seventh inning. He then retired the final nine hitters to earn his fifth win of the season.

"I realized I hadn't allowed any hits after the sixth inning, but it didn't really hit me until after the seventh inning," Mills said. "My heartbeat went up and I had to relax and calm down."

Shortstop Javier Baez secured the no-hitter when he fielded a ground ball from Jace Peterson and threw to Anthony Rizzo at first base for the game's final out.

"No one can take it away from you. I'm really, really happy that I was part of it."

The Cubs offense also got off to a slow start and didn't get a hit until the fourth inning. Jason Heyward plated Kyle Schwarber with an RBI double for the first run of the game. The Cubs pushed the lead to 2-0 on a fourth-inning fielding error. Caratini also had an RBI single in the inning. Happ had a two-run single in the fourth frame to give the Cubs a 5-0 edge.

Caratini hit an RBI double in the seventh inning for a 10-0 advantage. He plated another run with an RBI groundout in the ninth inning. Bote brought in the game's final run with an RBI sacrifice fly in the next at-bat.

Brewers starter Adrian Houser allowed four hits and seven runs in four innings to move to 1-5 on the season. Heyward went 2 for 3 with three runs scored, two walks and an RBI in the win. Caratini went 2 for 4 with three RBIs, two runs scored, a walk and a strikeout.

MLB // 5 days ago
Gleyber Torres homers twice in same inning, Yankees pummel Pirates
Sept. 22 (UPI) -- All eyes might be on Aaron Judge's historic journey through the home run record book, but teammate Gleyber Torres recently got in on the longball trend, with two bombs in the same inning of a New York Yankees victory.

MLB // 1 week ago
John Stearns, ex-Mets All-Star and coach, dies at 71
Sept. 16 (UPI) -- Longtime New York Mets catcher and coach John Stearns, who earned four All-Star selections while with the team from 1975 to 1984, died after a long battle with cancer, the team announced Friday. He was 71.