Chicago Cubs catcher Willson Contreras hit his second home run of the season in the eighth inning of a win against the Kansas City Royals Tuesday in Chicago. Photo by Kamil Krzaczynski/UPI | License Photo

Aug. 5 (UPI) -- The Chicago Cubs used a trio of timely home runs to hold off the Kansas City Royals for a win and maintain their hold on the best record in the National League.

Jason Heyward led the way with a 2-for-4 night, which included two RBIs and two runs scored in the 5-4 win Tuesday at Wrigley Field in Chicago. Jason Kipnis and Willson Contreras also homered for the Cubs (9-2).

"I think you're seeing a lot of guys contribute."

Royals shortstop Adalberto Mondesi put his squad ahead with an RBI single in the top of the second frame before the Cubs bats came alive.

Contreras singled off Royals starter Brady Singer to leadoff the bottom of the second frame. Heyward then settled in against Singer in the second at-bat.

The Cubs right fielder fell behind 0-2 against Singer before he took a ball in the dirt. He then smashed a 1-2 Singer slider over the right center field fence for a 412-foot home run. The blast gave the Cubs a 2-1 lead.

The Cubs held on to the one-run lead until Kipnis settled in against Singer in the bottom of the fourth frame. The Cubs infielder proceeded to hit an 0-2 fastball to right center field for a two-run homer. Kipnis' long ball traveled an estimated 423 feet and left the field in 4.9 seconds, according to Statcast.

Jorge Soler hit an RBI single in the top of the next inning for the Royals' second run before Contreras hit the Cubs' third homer of the night.

The Cubs catcher faced Royals relief pitcher Trevor Rosenthal during that exchange. Rosenthal earned an 0-2 lead in the count before Contreras took a ball. Contreras then smashed a 1-2 slider to left center field for a 422-foot solo shot.

Royals outfielder Alex Gordon brought in Salvador Perez on an RBI groundout in the top of the ninth inning. Second baseman Maikel Franco plated the Royals' final run with an RBI single in the same frame.

The Cubs face the Royals at 8:05 p.m. EDT Wednesday at Kauffman Stadium in Kansas City, Mo. 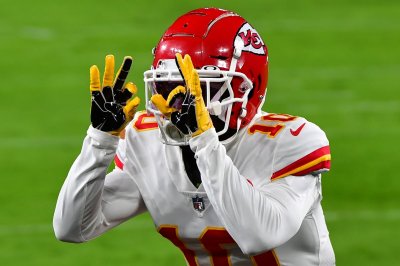