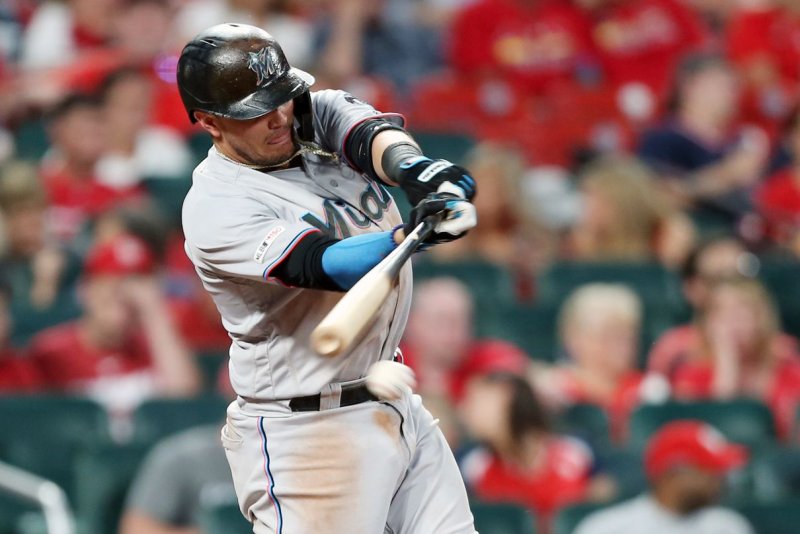 Veteran infielder Miguel Rojas is among more than a dozen Miami Marlins players who have tested positive for the coronavirus as the team remains in Philadelphia amid the outbreak. File Photo by Bill Greenblatt/UPI | License Photo

July 29 (UPI) -- Miami-Dade County's mayor said the Miami Marlins should quarantine for 14 days when they return home after more than half the team tested positive for COVID-19. The potential quarantine could cause chaos in the Major League Baseball schedule.

"I would say unless the governor gives an exemption. ... I would think the rules apply to them too," Miami-Dade County Mayor Carlos Gimenez said Tuesday.

Florida Gov. Ron DeSantis previously issued an exemption for sports teams that waived a 14-day quarantine period when they returned to the state after a road trip.

MLB has put the Marlins' season on hold through the weekend after at least after 16 players and several staff members tested positive for the coronavirus. The Marlins are the only MLB team that has had players test positive since Friday.

When they are able to return home from a season-opening series in Philadelphia, the Marlins will land in an area that ranks among the most-impacted by the coronavirus in the United States. The Marlins have been in Philadelphia since Thursday.

The team said Monday it would remain that until it receives test results from all of its players. Reports indicated four Marlins players tested positive Tuesday, while an additional player tested positive Wednesday.

If the Marlins return Wednesday, a 14-day quarantine could result in the team missing a total of at least 15 scheduled games.

The MLB season already has been shortened from 162 to 60 games this year, so rescheduling 25 percent of the team's games would result in a significant impact on other teams' calendars and could put the entire MLB season in jeopardy.

MLB could make many of the Marlins' future matchups double-headers, but that would require an itinerary overhaul for many other teams.

A cancellation of the Marlins' season would create gaps in other teams' schedules, but would eliminate the need to reconfigure the entire season calendar to fit in the Marlins' missed games.

The Marlins remain in limbo on the road, but their home venue also is in question as opposing teams fear travelling there and local authorities consider what precautions the team should take when players return to Florida.

Despite the lack of positive tests among 29 other teams, MLB has rescheduled games for four other clubs, in addition to the Marlins.

Other leagues, like MLS and the NWSL, removed teams from their tournaments when they resumed play after coronavirus season suspensions, after those teams experienced similar outbreaks.

MLB is in a different position than every other league as it had the most extensive plan for a return to play due to the most scheduled games amid the pandemic.

The Marlins are scrambling to find players to field a team while they also try to keep players on their current roster safe and the outbreak contained.

For now, the team has ramped up the frequency of testing while it is stuck in Philadelphia.

Marlins CEO Derek Jeter said Tuesday that the team has began a "daily testing schedule" as players isolate and quarantine.

The Marlins also have taken additional "preventative measures" with their traveling party. Jeter said the team contacted MLB after it received Tuesday's round of positive results.

"We look forward to safely returning to Miami where we conducted a successful and healthy spring [training] 2.0 before departing on the road and experiencing challenges," Jeter said.

"For the time being, we will remain in Philadelphia and gather information in order to make informed decisions and prepare for our return to action next week."

Other MLB teams' players and staff members are tested every other day. The tests are sent to diagnostic laboratories in Utah and New Jersey, and the results then are sent to the teams.

Some teams have experienced delays in that process, which has resulted in potential COVID-19 positive players being around teammates after they were tested, but before they received their test results.

MLB said the Marlins won't play until at least Monday. The league plans to announce additional schedule changes next week.