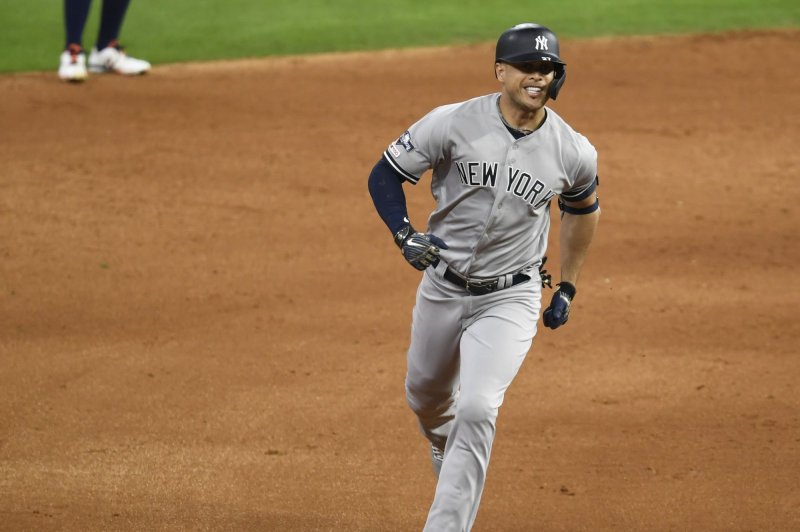 New York Yankees star Giancarlo Stanton, shown here in a postseason game in October, had one home run and three RBIs in the Yankees' win over the Washington Nationals on Thursday. File Photo by Trask Smith/UPI | License Photo

A fan holds a sign demanding ticket sales outside the Washington Nationals' home opener against the New York Yankees on Thursday at Nationals Park in Washington, D.C. Major League Baseball started its shortened 2020 season Thursday without fans due to the COVID-19 pandemic. Photo by Kevin Dietsch/UPI | License Photo

People eat outside at a restaurant near Nationals Park as the Washington Nationals hold their home opener against the New York Yankees on Thursday in Washington, D.C. Photo by Kevin Dietsch/UPI | License Photo

The Yankees held a 4-1 lead midway through the contest when severe weather entered the area, prompting a delay in the top of the sixth inning. After a one-hour, 58-minute delay -- 15 minutes more than actual game time -- the matchup was called off and New York was awarded the win.

Scherzer (0-1) recorded 11 strikeouts and was still in the contest for the Nationals when play was halted. In the first inning, the three-time Cy Young Award winner allowed a two-run home run to 2017 NL MVP Giancarlo Stanton that traveled 459 feet into the crowd-free seats.

Yankees star outfielder Aaron Judge followed that with an RBI double in the third. Stanton added an RBI single in the fifth to push New York's advantage to 4-1.

Gerrit Cole, who signed a nine-year, $324 million contract with the Yankees this past off-season, impressed in his debut wearing pinstripes. He gave up only one hit in his five innings and struck out five.

Cole's (1-0) lone blunder came in the first, when Nationals outfielder Adam Eaton sent a 98-mph fastball over the fence in right field. The ball traveled 406 feet and landed on top of the blue advertising tarps that stretch over unused seats at Nationals Park.

The Nationals took the field Thursday without 21-year-old star Juan Soto, who tested positive for the coronavirus hours before first pitch. Soto will be allowed to return to the club this season -- which was shortened from the traditional 162 games to 60 because of the COVID-19 outbreak -- after a series of negative tests.

After Friday's day off, the series between the Yankees and Nationals resumes Saturday night at Nationals Park. World Series MVP Stephen Strasburg is set to take the mound for Washington against New York's James Paxton.