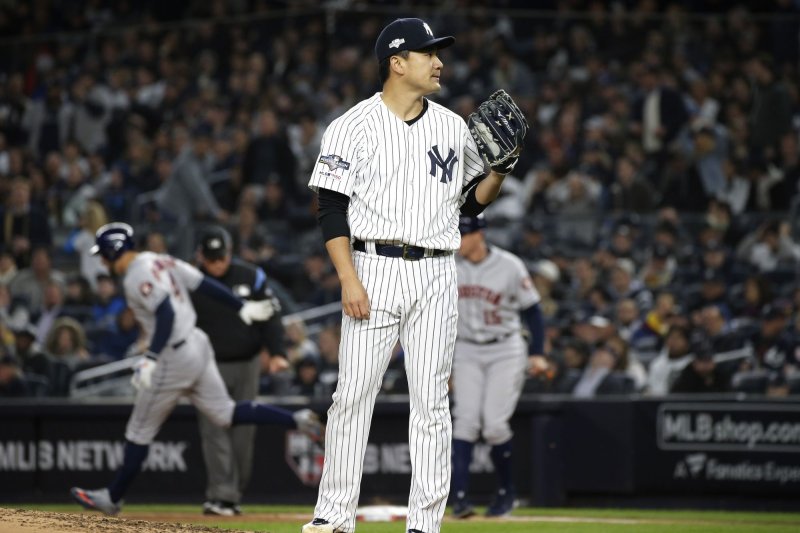 New York Yankees pitcher Masahiro Tanaka was hit in the head with a line drive and sustained a concussion Saturday at Yankee Stadium but returned to the team on Sunday. File Photo by John Angelillo/UPI | License Photo

July 6 (UPI) -- New York Yankees manager Aaron Boone said pitcher Masahiro Tanaka was in "good spirits" when he returned to Yankee Stadium a day after he was hit in the head by a 112-mph line drive off the bat of Giancarlo Stanton.

"He came in around noon [Sunday] and was in really good spirits," Boone told reporters. "He got a good night's sleep; no loss of appetite.

"All the signs are pointing that he really dodged the bullet there. We're encouraged where he is, but we'll take it day by day. Hopefully it's not something that's too long."

The sequence occurred when the Yankees took part in their first formal workout of Summer Camp on Saturday at Yankee Stadium. Tanaka took the mound and faced several hitters in a simulated game. Stanton stepped to the plate and hit a rocket in a split-second sequence. The ball drilled Tanaka on the right side of his head and flew through the air before it landed behind home plate.

Tanaka fell to the ground after the collision. Stanton also crouched down after he realized what had happened to his teammate. Trainers tended to Tanaka before he was helped off the field.

Tanaka was then sent to New York-Presbyterian Hospital and was released hours later.

Masahiro Tanaka was hit in the head with a line drive from the bat of Giancarlo Stanton during a simulated game.pic.twitter.com/biProHbgeK— Yankees Videos (@snyyankees) July 4, 2020

"I appreciate all the support," Tanaka wrote Saturday on social media. "I feel it a bit right now, but I'm all good. Going to try to get back on the mound ASAP! Thanks again for all the encouraging words!"

The Yankees on Sunday put a protective screen on the field between the pitcher and hitters to protect pitchers from similar sequences. The MLB season has been suspended since mid-March due to the coronavirus pandemic. Owners and players plan to return to the field for games July 23 or 24.

Tanaka, 31, posted a 4.45 ERA and an 11-9 record in 32 appearances last season for the Yankees. The two-time All-Star was scheduled to make $23 million this season before the players agreed to accept reduced salaries as part of the season resumption. Tanaka will hit free agency next off-season.